< In Puerto Rico, Creative Directions Make Up for Missing Addresses
Update Required To play the media you will need to either update your browser to a recent version or update your Flash plugin.
By Bryan Lynn
24 October 2020


In the U.S. territory of Puerto Rico, more than 300,000 homes have no official address. This is because across many parts of the island, street names or numbers do not exist.

This has long been a problem in the city of Caguas, near Puerto Rico's capital San Juan. Firefighters in the city cheered when they recently received new maps that included rural neighborhoods. In the past, firefighters and others said they sometimes had to depend on taxi drivers for directions during emergencies. 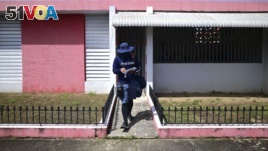 Postal worker Jose Montoya does his rounds in Carolina, Puerto Rico, Thursday, Oct. 1, 2020. More than half of all homes in Puerto Rico lack a physical address, so the absence of street names and numbers also have created multiple problems. (AP Photo/Carlos Giusti)

But the lack of street names and numbers across the island has long been a problem for the U.S. territory, where internet map services are known to fail.

To get around the problem, people have learned to use different objects and landmarks to help them reach their travel goals. For example, directions could involve a mango tree, a store, a park or a red farmhouse.

It is even a problem in cities. In one area of the capital, some people look for a life-size Bigfoot doll sitting outside a building to help them find their way to a nearby hospital.

In Puerto Rico, it is not unusual to hear something like: "Turn right at kilometer 58 and make a left after a large hole. If you go past the big breadfruit tree, you've gone too far."

Even the country's famous Oso Blanco prison is often still used as a landmark for giving directions even though the buildings were destroyed long ago.

The lack of addresses has made getting lost an acceptable and sometimes fun part of island life for some. But the coronavirus crisis – combined with recent natural disasters – have persuaded officials to seek new solutions to the problem.

With up to 60 percent of homes in some areas lacking an address, emergency workers cannot find people quickly to bring basic supplies or provide needed medical care.

"If you're not on a map, you don't exist," said Raúl Ríos, a former manager at the U.S. Postal Service. Ríos now leads iCasaPR, a nonprofit group that aims to standardize addresses across the island.

Puerto Rico's 78 localities and many government agencies still use separate databases that use different names for the same streets. They can also list the same addresses in different ways, such as 1013 or 10-13.

Four years ago, a young boy died in San Juan because it took an emergency medical vehicle 15 minutes to find his home in an area that did not have a standardized address, said Nazario Lugo. He is the president of Puerto Rico's Association of Emergency Responders. At the time of the incident, he led the city's emergency services.

He said the mother could not go outside to flag down emergency workers because she was giving medical aid to her son while speaking with a 911 operator on the phone.

As in other cities, officials in Caguas want to avoid such tragedies. Over the past decade, more than 100 roads have been named for the first time.

But there are many more that need identities and the naming process is not always easy, said Carmen Díaz, the city's planning director. For example, street names have to be completely unique and they are limited to 28 letters and numbers.

To help neighborhoods come up with ideas, Díaz provided books on Puerto Rican plants and animals. She also brought works by local writers. Díaz even suggested the name of the song "Calma" by Puerto Rican pop singer Pedro Capó.

Díaz told The Associated Press the use of landmarks to give people directions is not a long-term solution. "They've already changed the color of that pink house or cut down that tree," she said.

The Associated Press reported this story. Bryan Lynn adapted the report for VOA Learning English. Caty Weaver was the editor.

address – n. the number of the house or name of the road where someone lives

landmark – n. a building or place that is easily recognized

doll - n. a child's toy in the shape of a person or baby

standardize– v. to make things of the same type have the same basic features