< In Nigeria, New Money in Used Tires
Update Required To play the media you will need to either update your browser to a recent version or update your Flash plugin.
By Jonathan Evans
10 October 2021


Nigeria depends heavily on money from its oil exports. But businesswoman Ifedolapo Runsewe has identified another local resource that brings in money: used car tires.

Last year, Runsewe set up the Freetown Waste Management Recycle factory in Ibadan, a city in southwest Nigeria. Workers there turn old tires into material used for paving bricks, floors and other goods that are in high demand in the country.

"Creating something new from something that will otherwise be lying somewhere as waste was part of the motivation," Runsewe told Reuters.

Waste removal systems are poor in Nigeria. In villages, towns and cities, large amounts of waste are a common sight. People often burn the waste at night because safer removal methods are not available. Tires are often found among the waste.

The Freetown factory depends on people who collect old tires from areas where waste is left. They are paid 70 to 100 naira, or 17 to 24 cents, for each tire. 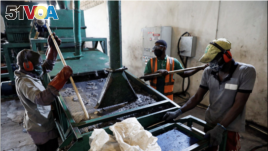 Some tires are also supplied directly by automobile repairmen like Akeem Rasaq. He told Reuters he is happy to have found a place where he can make some money from old tires.

Freetown started operations with just four employees. The factory now has 128 workers. So far, more than 100,000 tires have been recycled into everything from speed bumps to soft paving for playgrounds.

Houssam Azem is the founder of the Lagos Jet Ski Riders Club. He bought paving bricks from Freetown for a children's play area. "It is important to support anybody that recycles in our country," he said.

Azem added: "Taking tires... and turning them into what children can play on, I think it is a win-win for everybody."

Fikayo Owoeye and Seun Sanni reported on this story for the Reuters news service. Jonathan Evans adapted this story for Learning English. Bryan Lynn was the editor.

speed bump – n. a low raised ridge across a road or parking lot that causes people to drive more slowly

win-win – adj. providing a good result for everyone involved