< In Britain, It’s OK to Hug Again
Update Required To play the media you will need to either update your browser to a recent version or update your Flash plugin.
By Dan Novak
12 May 2021


England is ready to hug again.

Great Britain is now seeing around 2,000 new coronavirus cases a day, down from nearly 70,000 a day during the January peak. Daily deaths have also dropped a lot, with only two recorded Sunday.

The country's emergency level was also lowered to level three from four on Monday following a decrease in cases, hospitalizations and deaths. This means that the virus is no longer considered to be spreading quickly.

"This unlocking amounts to a very considerable step on the road back to normality, and I am confident that we will be able to go further," Johnson said in a press conference.

Britain has recorded Europe's highest number of coronavirus deaths, with more than 127,500. But new infections have decreased following a firm lockdown and one of the most successful vaccination programs in the world. Around 53 percent of the British population has received one dose of vaccine.

On May 17, Johnson is expected to announce that families will be able to visit each other indoors as well as gather in restaurants. All gatherings will be limited to six people or to two different families. The limit on outdoor gatherings is expected to be raised to 30 people. Similar restrictions are being eased in the other countries in Great Britain—Scotland, Wales and Northern Ireland. 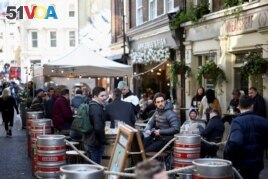 Indoor activities and businesses such as cinemas, sports, and hotels are also expected to reopen. The government said the plan is being guided by "data, not dates."

Nadine Dorries is Britain's Health Minister. "I think it's what most people have missed, that intimate contact with family and friends," she said.

The government will also allow some foreign travel to start on May 17. But there are only a few countries, like Portugal and Iceland, that are considered safe enough to avoid the 10-day quarantine rule upon return. Popular destinations like France, Italy, Spain and Greece still require quarantining and coronavirus tests.

Additional easing lockdown measures are expected June 21. Many are hoping all other limits on social behavior will be lifted then.

Though the coronavirus situation in the country is much improved, some remain concerned that the government is moving too quickly. That is because some countries, like India, are experiencing a deadly increase in infections, and many people still need vaccines.

Gurch Randhawa is a professor of public health at the University of Bedfordshire, and has been critical of the British government.

"It is no doubt tempting to relax social distancing...but this could be a big mistake at this stage of the COVID-19 pandemic," he said.

"The government should be advising only those who have received both vaccination doses to be hugging each other, and even, a short hug, with faces directed away from each other," he added.

hug – v. to put your arms around someone especially as a way of showing love or friendship

quarantine – v. the period of time during which a person or animal that has a disease or that might have a disease is kept away from others to prevent the disease from spreading

tempting-adj. causing an urge or desire to have or do something