< In an Unusual Move, Facebook Blocks News in Australia
Update Required To play the media you will need to either update your browser to a recent version or update your Flash plugin.
By Susan Shand
18 February 2021


The social media site Facebook blocked Australians from sharing news stories on Thursday. The company is fighting with the Australian government over whether big technology companies should have to pay news organizations for their information. Australia's government condemned the move. It said Facebook also blocked some government communications, including messages about emergency services.

Facebook acted after the Australian House of Representatives passed legislation that would make it and Google pay for Australian journalism, said Treasurer Josh Frydenberg. He said he was given no warning before Facebook acted. The legislation must be passed by the Senate to become law. 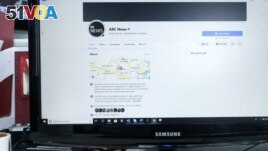 Facebook fears that similar legislation will pass in other countries. Governments around the world are changing their laws to have some control over fast-changing technology.

Australian news organizations could not put stories online on Thursday. People who tried to share news stories got notes saying they were blocked.

"This post can't be shared," the website said. "In response to Australian government legislation, Facebook restricts the posting of news..." It also said that news from Australian publications cannot be shared internationally.

The legislation has not yet been passed, the note added.

Prime Minister Scott Morrison criticized the company on his own Facebook page.

"These actions will only confirm the concerns that an increasing number of countries are expressing about the behavior of BigTech companies who think they are bigger than governments," he wrote.

"They may be changing the world, but that doesn't mean they run it," he added.

Facebook said the proposed Australian law "misunderstands the relationship between our platform and [the] publishers who use it."

The country's Health Minster Greg Hunt also denounced Facebook's decision. He described it to Parliament as an "abuse of big technologies' market power and control over technology."

In the past, Google and Facebook had threatened to take strong action if the law appears to be headed for passage.

Australia's law would create negotiation committees that would help news organizations work with big technology companies to decide on payment for their news stories. It would stop the technology companies from using their large market share to make "take it or leave it" offers.

Google had threatened to remove its search abilities from Australia because of the House measure. But, instead, Google reached compromises with several companies.

News Corp. announced a deal with Google on Wednesday. The large Australian news organization Seven West Media made a deal earlier in the week and another, Nine Entertainment is reportedly close to its own agreement. The state-owned Australian Broadcasting Corp. is in talks for a deal with Google, as well.

The government accused Facebook of endangering the public by blocking state emergency services messages. There were severe fire and flood warnings in parts of Australia.

Facebook said in a statement that it would look to replace any pages that should not have been removed.

Frydenberg said he had "constructive" discussions with Facebook chief Mark Zuckerberg after the blocking began.

"He will come back to me with some more considered views," Frydenberg said.

He said the government remains supportive of the proposed law because it will pay news organizations for the use of their material.

The Associated Press reported on this story. Susan Shand adapted it for Learning English. Caty Weaver was the editor.

response – n. something that is done as a reaction to something else

platform – n. something that allows someone to tell a large number of people about an idea, product, etc.

constructive – adj. helping to develop or improve something