< Images Can Help You Retain Vocabulary
Update Required To play the media you will need to either update your browser to a recent version or update your Flash plugin.
By Alice Bryant
10 November 2020


Suppose you are listening to a program in English and hear the word "borrow." You have heard this word many times but forget its meaning. So, you look up the equivalent word in your own language. Ahh, yes, now you remember! A few days later, you see the word again, but again cannot remember its meaning. Why?

It is easy to blame yourself or think, "I have a terrible memory!" But your memory is not the problem.

The problem is that translating a word to its equivalent word in your language is not an effective way to learn vocabulary. This is because it does not create strong connections in the brain, something critical for remembering information.

To really learn words, you have to bring attention to them and connect them with mental images or your existing knowledge. This helps your brain recall words quickly and easily when you need them. On today's Education Tips, we will discuss three methods that use images to retain vocabulary. 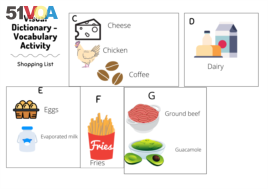 This image by Cristiana Galv&#227;o shows one simple way to organize pictures and information in a visual dictionary.

Michelle Zelin is an English teacher and teacher trainer. She has taught for nearly 25 years, including in South Africa, Latvia and Mauritius, her homeland.

She uses pictures or images with her beginning students and some of her mid-level students.

Cristiane Galv&#227;o has used pictures to teach vocabulary to students of every level, from grade school to the university level.