< Human Smuggling a Profitable Business at Immigrants’ Cost
Update Required To play the media you will need to either update your browser to a recent version or update your Flash plugin.
By Gregory Stachel
11 May 2021


Ronald Garcia is a 39-year-old Guatemalan man who recently entered the United States illegally. He is currently at Casa Alitas, a shelter for immigrants in Tucson, Arizona. While there, he told about his border crossing.

Garcia said he paid smugglers $20,000 to get him across the border. He said he had to sell all he owned to come to the U.S.

Crossing into the United States illegally is a big business in Central and South America. Many people leave their countries due to the violence and poverty. They pay huge amounts of money and risk their lives to leave. 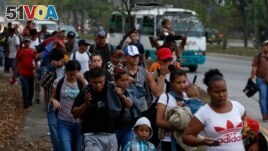 FILE - In this April 10, 2019 file photo, migrants walk at dawn as part of a new caravan of several hundred people sets off in hopes of reaching the distant United States, in San Pedro Sula, Honduras. (AP Photo/Delmer Martinez, File)

Garcia said of his experience, "They put me in a trunk where you couldn't breathe, and well, thank God (I survived), because they say that all those who are put there, they die."

A RAND Corporation study estimated smugglers made between $200 million and $2.3 billion in 2017 transporting people into the U.S., mostly from Central America.

USPB spokesman Mario Escalante said it is a dangerous business as well. He said smugglers sometimes abandon the migrants, steal from them, rape them and worse.

"They ask for a quantity of money, and if they don't get it by the time and date they say, they'll kill you," he said.

Henry Cuellar is a U.S. lawmaker from Texas. The congressional area he represents stretches from San Antonio to the border town of McAllen in southern Texas.

But it is not just criminal organizations making money from immigrants.

Private research business Dynamic Securities Analytics reports that the American financial industry also profits from the illegal business. They profit from fees connected to electronic payments made by undocumented immigrants.

Aline Barros and Celia Mendoza reported this story for Voice of America. Gregory Stachel adapted it for VOA Learning English. Caty Weaver was the editor.

trunk – n. the enclosed space in the back of a car for carrying things

quantity – n. a large amount or number of something