< Huge Black Diamond Falls From Space
Update Required To play the media you will need to either update your browser to a recent version or update your Flash plugin.
By Anna Matteo
18 January 2022


People use the saying "out of this world," to praise something as exceptional. But, at auction house Sotheby's Dubai, officials are using the term literally.

The company announced this week that it will sell a black diamond that they say is believed to have fallen to Earth from outer space. That would make it a literal "out of this world" jewel.

Sotheby's calls the large black diamond, "The Enigma." It weighs 555.55 carats. A carat is a term of measurement for valuable stones often used in jewelry. One carat equals 200 milligrams. 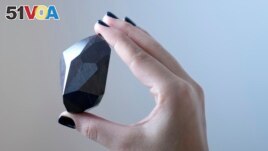 The rare stone was shown to reporters at Sotheby's on Monday. In February, it will be put up for sale at Sotheby's in London.

Sotheby's expects the purchase price will reach at least $6.8 million.

On its website, the science organization writes that carbonado diamonds form during supernova explosions. "Black diamonds," the website says, "were once the size of asteroids a kilometer or more" across when they first began to hit Earth.

Carbonado diamonds are extremely rare and are found naturally only in Brazil and Central Africa. Experts say study of the stone's chemical structure leads them to believe they come from space.

Sophie Stevens, a jewelry specialist at Sotheby's Dubai, told The Associated Press that the number five has a great importance to The Enigma. Along with its carat weight, the diamond also has 55 facets. Facets are the flat surfaces of a cut gem.

Stevens explained that the shape of this black diamond is based on the Khamsa, an important symbol in the Middle East and northern Africa. "It stands for strength and it stands for protection."

auction – n. a public sale at which things are sold to the people who offer to pay the most : auction house – n. a business that runs auctions

literally – adv. in a way that uses the ordinary and usual meaning of a word

supernova – n. the explosion of a star that causes the star to become extremely bright

asteroid – n. any of the small rocky celestial bodies found especially between the orbits of Mars and Jupiter

gem – n. a valuable stone that has been cut and polished for use in jewelry

symbol – n. an action, object, event, etc., that expresses or represents a particular idea or quality