< How to Split Infinitives
Update Required To play the media you will need to either update your browser to a recent version or update your Flash plugin.
By Dr. Jill Robbins
12 August 2021


Your English teacher may have told you, "Do not split infinitives." But if you have been reading Everyday Grammar for the past few years, you already know that we no longer worry so much about this rule.

As a student of grammar, you likely know that an infinitive usually begins with the word "to" and is followed by a verb in its base form. We can see examples of infinitives in many news stories about the Delta variant of COVID-19, such as "to spread" in this sentence: 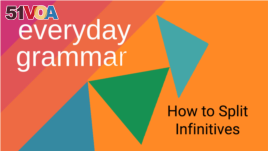 The Delta variant is able to spread faster than the original virus.

A split infinitive happens when an adverb or other modifier is placed between "to" and the verb. For example, we could add the adverb "rapidly" to this sentence:

In this case, the sentence would also be correct in this form:

But there are other cases where you cannot change the word order. Staying with the health crisis, we read that:

Coronavirus cases due to the Delta variant are predicted to more than double in some states.

Here, the verb "to double" means to increase by 100 percent.

If you are reading along with the story you will see a star before the next example sentence. That means it has incorrect grammar. For those of you listening, I will just say "star" before the incorrect sentence.

So it would be incorrect to change this sentence to:

*Coronavirus cases due to the Delta variant are predicted to double more than in some states.

The same thing is true of the modifiers "up to," and "over." For example, we can make this sentence:

The CDC says the Delta variant has the ability to up to triple infection rates in coming weeks.

But as with "more than," the sentence would not be correct if you put "up to" after the infinitive or moved it before the "to" of the infinitive.

* The CDC says the Delta variant has the ability to triple up to infection rates in coming weeks.

The reason for these split infinitives has to do with the nature of the modifiers "more than," "up to" and "over." The Cambridge Grammar of the English Language calls these "prepositional modifiers." Like prepositions in general, they must appear immediately next to the expression they combine with.

If you have trouble remembering what a split infinitive is, you can think of a famous one in popular culture. The television show Star Trek always begins by describing its mission:

...to explore strange new worlds. To seek out new life and new civilizations. To boldly go where no one has gone before!

Here, the adverb "boldly" appeared within the infinitive "to go."

As the Olympics ended this week, we heard about the medal count for each country. The United States brought home 39 gold medals, while the People's Republic of China earned 38. How would you use the verb "to match" to describe this situation?

The People's Republic of China was able to nearly match the U.S. for gold medals in the Olympics.

Can you identify the split infinitive in that example? Would it work to change the order of the words? Write your answer in the comments.

original – adj. existing since the beginning

modify – v. (grammar) to limit or describe the meaning of (a word or group of words)

match – v. to be as good as someone or something else

Can you write a sentence with a split infinitive? We want to hear from you. Write to us in the Comments Section.