< How 'So' Can Replace a Lot of Information
Update Required To play the media you will need to either update your browser to a recent version or update your Flash plugin.
By John Russell
05 August 2021


Think about American movies or books that you know. You have probably heard or read statements such as "I guess so," "I don't think so," or "he said so."

In today's Everyday Grammar, you will learn about the grammar behind such statements. 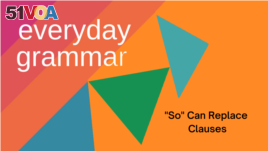 We will explore shortened clauses. You will learn about the word so, and how it commonly replaces one kind of clause in everyday speaking and writing.

But first, let's begin by finding out what a clause is.

Clauses are groups of words with a subject and a predicate, the part of the sentence that says something about the subject.

When a clause is independent, it is a complete sentence. For example:

The subject is I, and the words love grammar make up the predicate.

When a clause is dependent, it plays a part in a longer sentence. For example:

I believe that learning grammar is important.

Here, the subject is I and the predicate is believe that learning grammar is important.

Note that a dependent clause, that learning grammar is important, appears in the predicate.

There are different kinds of dependent clauses. The one we are interested in begins with the word that - just like in the example you heard.

You might be asking yourself how this discussion connects with the word so.

The answer is that English speakers often replace that-clauses with the word so, especially after certain verbs. The most common of these verbs include guess, think and hope.

Consider this example. Imagine two people are trying to decide about something to watch.

Have you seen this movie?

I don't think so.

In the example, the word so replaces a that-clause. If the speaker did not use so, the example would have sounded like this:

Have you seen this movie?

I don't think that I have seen this movie.

English speakers often shorten noun clauses that would repeat what they have already said - or what another speaker has said.

English speakers usually do not replace that-clauses if the information is new.

Let's think about another example:

Did you remember to turn off the gas stove before we left the house?

Such an answer is not very convincing and should be a cause for concern.

Please note that the example would have been longer if the word so were not used, as in:

Did you remember to turn off the gas stove before we left the house?

I hope that I remembered to turn off the gas stove before we left the house.

One reason English speakers replace that-clauses with the word so is because of speed. It is much faster to not repeat information. Discussions that repeat so much information would become too long!

The next time you are watching shows or reading books in English, pay careful attention to how speakers use the word so. Make note of which verbs they use. And be sure to look for other kinds of words they use to replace clauses.

That might have to be a subject for another report.

grammar – n. the set of rules that explain how words are used in a language

convince –v. to persuade a person of that something is true