< How Job Training for US Students Can Get Better
Update Required To play the media you will need to either update your browser to a recent version or update your Flash plugin.
By Dan Friedell
17 July 2021


Monica Bentley is the administrator for Edison Academy in the American state of Virginia. The academy helps students learn about things like computer security, car repair, hair and beauty care and supervising a professional kitchen.

Bentley has many years of experience helping students learn about careers. But she recently had trouble persuading one student — her daughter — to try out a job training class at the academy.

"She didn't want to travel," Bentley said of her daughter, whose main school is about 30 minutes away from the career training center. "I wasn't going to make her do it, but I think it would have been a great opportunity."

They need to persuade students to take more than one or two classes. They also need to expand programs that prepare students with basic training for higher-level training after high school. 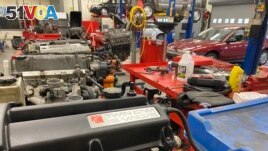 A view of the auto repair shop at Edison Academy in Fairfax County, Virginia.

Another problem is when students are interested in taking career training classes, but their parents do not agree. They might believe the student should take more classes in subjects like math and science.

Bentley said sometimes parents' wishes prevent training centers like the Edison Academy from getting the community support they need. However, once parents see the kind of education their child can receive from a career training center, they usually change their minds.

"The attitude that students doing well shouldn't waste their time in [CTE] classes is heavily damaging to the experience and needs to see a change," he said.

Alisha Hyslop is the Senior Director of Public Policy for the Association for Career and Technical Education. Hyslop said training centers like the Edison Academy are good for students who do not want to attend college. But the people in charge of the centers also need to tell people that many students who take classes there move on to attend college.

Hyslop gave the example of a student who might earn a starting credential for engineering or computer security in high school. After graduation, that student could then go on to study that subject in college.

"Building pathways and strengthening pathways for students is really important as we look toward the future and as the job market continues to require kind of higher and higher levels of skills."

Last month, VOA spoke with A.J. Muir, who took classes in cybersecurity at Edison Academy. He will continue to study computer technology in college.

Recently, the advising company McKinsey produced a podcast called "Grabbing Hold of the New Future of Work." In it, experts discussed how the COVID-19 pandemic took away some traditional jobs. But they said it made the kind of jobs that can only be done by a human more important.

Susan Lund, a global labor expert at McKinsey, said there will not be as many jobs for people who, for example, once helped buyers choose clothes at a store. That is because more people are buying clothing online.

She said her company's research shows that in the U.S., there will be 17 million fewer service jobs over the next 10 years. Many jobs in restaurants, hotels or stores do not require a college education. The experts said they are worried about how those 17 million people will replace the income from those jobs.

Lund said people who can go to a factory and load software on a robot will be more in demand than ever. Those are the kinds of in-person jobs that many students are learning at career training centers.

Lund and training center expert Hyslop had similar things to say about the future of career education. Both said training works better when high school students have a guaranteed next step after they graduate. Lund said some high school programs last for six years instead of the traditional four. Students who complete all six years graduate with a technology degree.

There is a program in New York City where high school graduates go straight to a program at City University of New York.

"And they have amazing rates of graduation and are graduating students who are then ready to actually go get a job because they have some technical skills."

Bentley said one of her most important jobs is telling people about her academy's success. She is looking forward to doing that more when school starts again in August. She thinks once students get a better idea of the class offerings, there could be more interest.

"We might need more academies, too, as the word spreads," she said.

career –n. a job or profession that someone has for a long time

obstacle –n. a barrier; something that makes it more difficult to reach an aim or goal

attitude –n. the way you think and feel about something

align – v. to arrange things so that they are in the correct position

seamless – adj. moving from one thing to another without problems

credential –n. a document which shows that a person is qualified to do a particular job

income –n. money that is earned from work, investments or business