< How do Astronauts Clean Their Clothes in Space?
Update Required To play the media you will need to either update your browser to a recent version or update your Flash plugin.
By Jill Robbins
26 June 2021


Have you ever wondered how astronauts clean their clothes in space? You may find the answer surprising – they do not.

They wear their under clothes, and everything else, until they cannot take the dirt and smell anymore. Then, they throw them away. 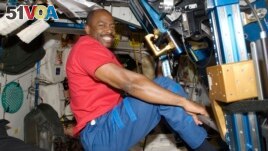 In this Nov. 22, 2009 photo made available by NASA, astronaut Leland Melvin, STS-129 mission specialist, exercises in the Unity module of the International Space Station. (NASA via AP)

NASA wants to change that - if not at the International Space Station (ISS), then the moon and Mars. This would mean the end to throwing away lots of dirty clothes every year. Up to now, they simply had to put them with other waste in old supply ships to burn up in the atmosphere. NASA is working with the U.S. company, Procter & Gamble (P&G), to learn how best to clean astronauts' clothes in space. They could use the clothes for months or even years, just like on Earth.

P&G announced Tuesday that it will send Tide detergent and dirt removal experiments to the space station later this year and next year. The battle against dirty and sweaty clothes in space has begun.

It is not a small problem, especially as the U.S. and other countries plan to establish bases on the moon and Mars.

Throwing clothes away is wasteful

NASA says rocket storage space is small and costly. So, why waste it on new clothes if they could keep their old clothes looking and smelling fresh? An astronaut needs 68 kilograms of clothes in space per year. Mark Sivik is a chemist specializing in fabric and home care technology for P&G. The clothes would use a lot of storage space, especially on a three-year Mars mission, he said.

There are also the problems of health and comfort.

Space station astronauts exercise two hours every day to fight the effects of weightlessness on their bodies. That quickly leaves their workout clothes sweaty, smelly and stiff. Leland Melvin is a former NASA astronaut and NFL player. He says their exercise clothing becomes so unpleasant that they use a new set every week.

"After that, they're deemed toxic," said Melvin, who serves as a spokesperson for P&G's project. "They like have a life of their own. They're so stiff from all that sweat."

While NASA and the other space station partners have researched ways to lengthen wear time with special antimicrobial clothes, that is not a long-term solution.

In its first experiment, P&G will send up detergent made just for space in December. Scientists will then see how the compounds in the detergent react to six months of weightlessness. Next May, they will send stain-removal pens and cloths to the ISS for testing by astronauts.

At the same time, P&G is developing a washer-dryer machine that could operate on the moon or even Mars. It would use small amounts of water and detergent. Such a machine could also be useful in dry places here on Earth.

One of the many design problems is that the washing water would need to be reclaimed for drinking and cooking. This is done now with human liquid waste and sweat on the space station.

"The best solutions come from the most diverse teams," Melvin said, "and how more diverse can you be than Tide and NASA?"

Marcia Dunn wrote this story for the Associated Press. Jill Robbins adapted it for Learning English. Susan Shand was the editor.

detergent – n. a powder or liquid that is used to clean clothes or dishes

sweat – n. to produce a clear liquid from your skin when you are hot or nervous

deem – v. to think of (someone or something) in a particular way

microbe – n. an extremely small living thing that can only be seen with a microscope

stain – n. a mark made on a surface or a piece of clothing that is very hard or impossible to remove

diverse – adj. different from each other

Have you ever been in a place where it was difficult to clean your clothes? What did you do? We want to hear from you. Write to us in the Comments Section.