< Horse Roundups Amid Drought Create Debate
Update Required To play the media you will need to either update your browser to a recent version or update your Flash plugin.
By John Russell
22 August 2021


In recent weeks, federal workers have conducted large helicopter roundups to remove wild horses in the American states of Utah and Colorado.

The Bureau of Land Management, the agency responsible for public lands across the United States, says the roundups are necessary to protect the environment and the horses as severe drought takes place.

However, animal activists say the U.S. government is using drought as an excuse to take out horses in favor of cattle grazing.

Terry Messmer is a professor at Utah State University who studies wild horse management. He said, "What we're seeing here in the West gives some insight into a new norm." Norm means behavior that is usual or expected. 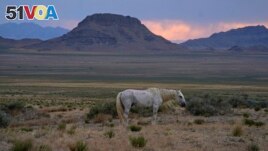 A free-ranging wild horse known as the Old Man is shown on July 14, 2021, as the sun sets near U.S. Army Dugway Proving Ground, Utah. He was left behind in a July roundup that removed about 300 other horses from the range. (AP Photo/Rick Bowmer)

The wild horses are largely descended from those brought by Europeans hundreds of years ago. Herds – or groups of horses - can double in size every four to five years. When populations grow too high they destroy soil, reduce water supplies and eat grass necessary for native species like the increasingly rare sage grouse, Messmer said.

The Bureau of Land Management, or BLM, oversees a very large area of land in the American West. It is also responsible for controlling the wild horse population. The BLM plans to remove some 6,000 horses, mostly from Nevada, Oregon, Wyoming and Colorado, by October — a 50 percent increase from last year. Eventually, the agency wants to reduce the number of wild horses by two-thirds.

Without these measures, officials say horses could die of thirst or hunger. In 2018, many horses were found dead near a dried-up watering hole in northern Arizona.

Horses that are captured end up being used by law enforcement groups such as the U.S. Border Patrol. They also go to prison programs where they are trained for future use. And others are made available for public adoption.

Suzanne Roy is executive director of the American Wild Horse Campaign. Roy described the government's decision to control horses while "giving a pass to livestock that have a greater" effect on public lands as "unfortunate."

Ranchers say they have made changes to reduce their animals' feeding on federal lands. By taking water to dry areas for their animals, they have helped the horses who drink it too, said Hunter Ihrman. He is a spokesman for the National Cattlemen's Beef Association.

But Messmer said the number of livestock that grazed on public land is far larger than the number of wild horses. A key difference, though, is that livestock are part of the U.S. economy.

Kathy DeGonia is president of Piceance Mustangs. DeGonia described the difficulty of the situation.

"In a perfect world we'd let all of these mustangs stay out there until they die," she said. "But there's just not enough food and water to maintain all the horses on the range."

Lindsay Whitehurst and James Anderson reported on this story for the Associated Press. John Russell adapted it for Learning English. Hai Do was the editor.

roundup -- n. the act or process of gathering together animals (such as cattle) by circling around them in vehicles or on horses

graze -- v. of an animal : to eat grass or other plants that are growing in a field, pasture, etc.

management – n. the act or process of deciding how to use something; the act or skill of controlling and making decisions about a business, department, sports team, etc.

insight – n. an understanding of the true nature of something

thirst -- n. an uncomfortable feeling that is caused by the need for something to drink

adoption – n. the act or process of adopting someone or something:

livestock -- n. farm animals (such as cows or pigs) that are kept, raised, and used by people

range -- n. open land that animals (such as cows and sheep) use for grazing and roaming