< ‘Heyday’ Is The Best of Times
Update Required To play the media you will need to either update your browser to a recent version or update your Flash plugin.
By Anna Matteo
28 August 2021

On this program we explore terms and expressions in the English language. And today we talk about a word that will help you talk about the best of times. That word is heyday. 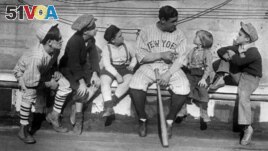 In his heyday, Babe Ruth was one of the highest paid athletes and most famous people in the world. Here, he tells children stories of his life from orphanage to baseball fame, November 29, 1924. (AP File Photo)

Some people had their heydays when they were young, maybe in college or high school. They consider themselves past their prime. They might talk about those past experiences only and not plan for new experiences in the future. These people might be stuck in their glory days.

Other things besides people can have a heyday. If you are at the pinnacle of success, you could say your career is having a heyday.

Also, a place, like a city, can have a heyday and so can an industry.

For example, I grew up in the rust belt of West Virginia. In its heyday, my hometown was known for its steel industry. In fact, every man in my family worked in the steel mills. But when the industry shrank, the steel factory jobs disappeared. The city fell on hard times and today is still trying to recover. However, many other parts of West Virginia are having a tourism heyday because of the beautiful natural environment.

So, where does the word heyday come from?

Some word experts say that it first appeared in English in the 16th century as an interjection. An interjection is a word or cry (such as "ouch") that expresses a sudden or strong feeling. So, "heyday" was used to express extreme happiness or wonder.

Around the same time, "heyday" was also used as a noun meaning "high spirits."

Meriam-Webster online dictionary says it was not until the 18th century that the word was used to mean "the period when one's achievement or popularity has reached its zenith."

Usually, we use heyday in the singular form. Saying the plural is a little less common.

And that's all the time we have for this Words and Their Stories. Until next time, I'm Anna Matteo.

Anna Matteo wrote this for VOA Learning English. Caty Weaver was the editor.

heyday – n. the time of greatest strength, popularity, or success

prime – n. the period in life when a person is best in health, strength, etc. : the most active or successful time of a person's life

peak – n. at the highest point or level

pinnacle – n. the best or most important part of something : the point of greatest success or achievement

glory days – n. a time in the past that is remembered for great success or happiness

zenith – n. the strongest or most successful period of time