< ‘Hero’ Rat Receives Award for Searching out Landmines
Update Required To play the media you will need to either update your browser to a recent version or update your Flash plugin.
By Bryan Lynn
28 September 2020


For the first time, a rat has won a British aid group's top award for animal bravery. The animal is being honored for its work searching out unexploded landmines in Cambodia.

The award winner is an African giant pouched rat named Magawa. British charity PDSA gave its Gold Medal to Magawa for his "lifesaving bravery and devotion to duty." 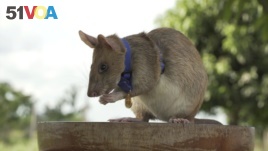 In this undated photo issued by the PDSA, People's Dispensary for Sick Animals, Cambodian landmine detection rat, Magawa is photographed wearing his PDSA Gold Medal, the animal equivalent of the George Cross, in Siem, Cambodia. (PDSA via AP)

PDSA was founded in 1917 to provide free healthcare to animals. It was first known as the People's Dispensary for Sick Animals. The group has been honoring heroic animals since 1943.

Magawa was trained by a Belgian organization that has been teaching rats to find landmines for more than 20 years. The group, APOPO, aims to help clear mines left behind from wars and conflicts. It works with programs in Cambodia, Angola, Zimbabwe and Mozambique.

Magawa is the group's most successful rat. He has cleared more than 141,000 square meters of land over the past four years.

APOPO's chief Christophe Cox told The Associated Press Magawa's medal was a huge honor for the group's animal trainers. "But also, it is big for the people in Cambodia, and all the people around the world who are suffering from landmines," he said.

Cox added that he hopes the Gold Medal award can bring more worldwide attention to the problem of landmines.

APOPO says that more than 60 million people in 59 countries continue to be threatened by landmines and unexploded weapons. In 2018, landmines and other remnants of war killed or injured 6,897 people, the group said.

APOPO noted on its website it currently has 45 rats looking for landmines and 31 searching for the disease tuberculosis in Africa and Asia.

Many rodents can be trained to search things out with their nose and perform work for food. But APOPO decided that giant African pouched rats were best equipped to help clear landmines because of their African roots and lifespan of up to eight years.

The rats' size permits them to walk across mine fields without setting off explosives. They also work much faster than people.

Magawa was born in Tanzania, but is now based in the Cambodian city of Siem Reap. He is the first rat to receive a PDSA medal in the 77-year history of the awards. Other winners have included brave dogs, birds and a cat.

The PDSA Gold Medal is the animal equivalent of Britain's George Cross award, a hero award for humans. The PDSA also awards the Dickin Medal, for animals performing military work.

Bryan Lynn wrote this story for VOA Learning English, based on reports from The Associated Press, msn.com and the Apopo website. George Grow was the editor.

devotion – n. a feeling of strong love or loyalty

remnant – n. the part of something that is left when the other parts are gone

rodent – n. an animal with long, sharp teeth, such as a mouse or rabbit

lifespan – n. the amount of time a person lives