< Heat Wave Breaking Records Across Pacific Northwest
Update Required To play the media you will need to either update your browser to a recent version or update your Flash plugin.
By Dan Novak
28 June 2021


High temperature records are being broken across the Pacific Northwest, as an extreme heat wave covers the area.

In Eugene, Oregon, it was so hot that U.S. Track and Field cancelled Olympic trials Sunday afternoon. The National Weather Service (NWS) said it hit 43.3 degrees Celsius in Eugene, breaking the all-time record of 42.2 degrees Celsius. Those who had come to watch were also asked to leave the stadium because of the heat.

Oregon's capital city, Salem, also recorded the highest temperature in its history on Sunday: 44.4 degrees Celsius. That broke the old record by 2 degrees. 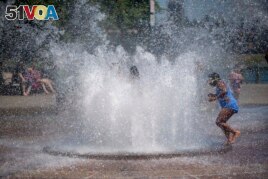 While Portland reached a record temperature of over 110 degrees Sunday, June 27, 2021 people gathered at Salmon Street Springs water fountain in Portland to cool off. (Mark Graves/The Oregonian via AP)

In Seattle, a city known for its rain, the temperature reached 40 degrees Celsius. The NWS said that was an all-time record. It was the first time temperatures were over 38 degrees Celsius for two straight days since records were first kept in 1894.

There were also some power outages. Portland General Electric said about 3,000 customers were without electricity in the city area Sunday afternoon. Puget Sound Energy reported 3,400 customers without power in the Seattle area.

Temperatures were expected to get even hotter across the region Monday, before beginning to cool Tuesday.

A heat warning is in effect for most of Western Canada. The country's weather agency says many daily temperature records have been broken across British Columbia.

Seattle's King County closed several COVID-19 testing sites because of the heat. The Seattle Times reported that the city has opened additional public libraries to provide cooling centers. Sound Transit said that Seattle's light rail trains may have to run at slower speeds because of high heat on the tracks.

The heat wave also moved into Idaho. Temperatures there reached above 38 degrees Celsius. They are expected to continue for at least seven days starting Monday.

Cities were telling citizens where pools and cooling centers were available. Officials were also urging people to drink a lot of water and avoid physically tiring activities.

Still, about 3,000 athletes took part in an Ironman Triathlon in Coeur d'Alene, Idaho, on Sunday. The event includes a 3.9-kilometer swim, a 180-kilometer bike ride and a 42-kilometer run.

The NWS in Coeur d'Alene said this week's weather "will likely be one of the most extreme and prolonged heat waves in the recorded history of the Inland Northwest."

Race organizers said they had 28,000 kilograms of ice to keep the athletes cool, KHQ-TV reported.

Dan Novak adapted this story from reporting by The Associated Press. Susan Shand was the editor.

dome – n. a large rounded roof or ceiling that is shaped like half of a ball

outage — n. a period of time when there is no electricity in a building or area

library – n. a place where books, magazines, and other materials (such as videos and musical recordings) are available for people to use or borrow

triathlon— n. a long-distance race that has three parts (such as swimming, bicycling, and running)

prolonged — adj. lasting longer than usual or expected : continuing for a long time