< Harvest Workers Among COVID World's Last Normal Travelers
Update Required To play the media you will need to either update your browser to a recent version or update your Flash plugin.
By Susan Shand
18 October 2020


Alexandra Ichim's hands moved quickly, cutting and dropping grapes into plastic containers. Nearby, a few Italian students also working in the vineyard tried to work just as quickly but could not.

Alexandra Ichim lives in Romania. She had never worked in vineyards before traveling to Italy's Lombardy area for the September grape harvest. For the Italian work, the 20-year-old came on a 12-hour bus ride and returned by plane to Romania when the harvest was finished. 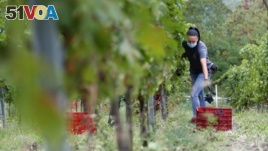 Eastern European seasonal workers, many of them Romanians, are important for getting food to homes throughout Europe. Their willingness to work hard in temporary jobs for low pay makes them valuable in agricultural areas. They send most of their earnings home, where many people are poor.

At a time when travel for work is seen as dangerous for everyone, seasonal workers are among the world's last border-crossers. The European Union does not offer them any special protection should they fall sick.

Around one in five Romanians works overseas. About 1.2 million of them have made a home in Italy. Thousands of others travel back and forth for temporary jobs in Italy, France and Spain.

When coronavirus struck, around a million people living throughout Europe returned to Romania. They ignored the Romanian president's calls to stay in place and avoid bringing the virus home.

Workers can earn around 1,200 euros a month by working eight-hour days in Italy. By comparison, they can make around 700 euros for a month of 10-hour days in Romania.

Alexandra Ichim speaks perfect Italian and has lived off and on in Lombardy with her mother since 2006. She was in Romania with her father when the coronavirus outbreak first struck Italy earlier this year. She was working in a factory, but it later sent her home because of the virus.

One area in Italy, Trento, permitted farms and vineyards to put in place "working quarantines." Seasonal workers were permitted so long as they wore face coverings and stayed in housing at the farm.

"A company cannot afford to keep a foreigner for 14 days without putting him to work," said Roberto Caponi of the Italian agriculture confederation. Also, the fruit growing in the fields cannot wait, notes Ottavia Giorgi di Vistarino.

Ichim joined a group of workers for the first Pino Nero harvest in September. The winery's full-time chief is Christian Florisan. He is also Romanian, as are many of the men who work the wine presses.

"Corona(virus) has brought the agriculture business to its knees more than any others. Everywhere, at home in Romania and here in Italy, we are having difficulties finding people," said Florisan. He has lived in Italy for 14 years.

Florisan added that many workers are afraid of catching COVID-19 and being forced to quarantine, which might use up all the money they have earned.

He estimated more than 50 percent of his workers are Romanian, but the numbers are down by 25 percent this year. Across Italy, wineries are down 36,000 workers, which means not all the fruit will be harvested in time.

All who came from Romania had medical exams, Florisan said.

As many as a million seasonal workers cross EU borders every year, notes the European Commission.

When the virus first broke out, Romania's president asked citizens not to return from their jobs outside the country, but his appeal was mostly ignored. Many Romanians either needed or wanted to return for what would become weeks of staying at home. Back in Romania, suspicious neighbors contacted government officials to report returnees from Italy or Spain or France.

Ichim and her boyfriend, Dennis Sirca, were already planning to return to Romania and may have to quarantine when they arrive.

That is fine with them because they made two to three times as much during the harvest as they could have in their "real" jobs. Ichim said she would do it again.

"In Romania, we do not make money, we cannot make money working so we came here to do the grape harvest," she said.

After borders closed last spring, Western Europeans realized they needed the Romanians and other seasonal workers for the harvest. German and British companies even sent planes to get Romanian workers.

vineyard – n. a place where grapes are grown to make wine

outbreak – n. the sudden appearance of a contagious disease

quarantine – v. to live alone when one has a contagious disease

confederation – n. an organization or group

wine – n. an alcoholic drink made from grapes