< Hamas Fires Rockets, Israel Launches Airstrikes as Tensions Rise
Update Required To play the media you will need to either update your browser to a recent version or update your Flash plugin.
By Hai Do
10 May 2021


Hamas, a Palestinian militant group, fired rockets into Israel on Monday. The group fired the rockets after hundreds of Palestinians were hurt in clashes with Israeli police in Jerusalem earlier Monday.

Israel's Prime Minister Benjamin Netanyahu warned of continuing operations against Gaza's Hamas rulers. In a speech, he accused the militants of crossing a "red line" with the latest rocket fire. "Whoever attacks us will pay a heavy price," he said, warning that the fighting could "continue for a while." 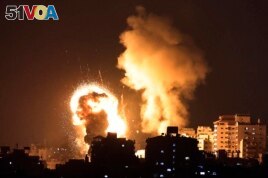 Fire rises from Israeli air strikes in the Gaza Strip, controlled by Hamas, on May 10, 2021. Israel launched the air strikes after a series of rockets fired by Hamas to answer the clashes in Jerusalem. (Photo by MAHMUD HAMS / AFP)

In Washington, D.C., U.S. Secretary of State Antony Blinken urged both Israel and the Palestinians to lower tensions and urged an immediate end to rocket fire by Hamas.

A spokesman for Hamas' military division said the rocket attack was an answer to what he called Israeli "crimes and aggression" in Jerusalem. He threatened more attacks if Israel enters the area of the Al-Aqsa Mosque or carries out planned removal of Palestinian families from east Jerusalem.

A spokesman for the Israel military said at least six of the 45 rockets fired from Hamas-controlled Gaza were launched toward Jerusalem. A house was hit but no injuries or deaths were reported. He added, "We have started to attack Hamas military targets."

Earlier in the day, Israeli officials had changed the path of a planned march through the Muslim Quarter of Jerusalem for Jerusalem Day. The change was an effort to avoid violence between Israeli groups in the march and Palestinians. The day celebrates Israel's capture of east Jerusalem in the 1967 Arab-Israeli War.

The Associated Press reported that Palestinian protesters, behind wooden boards and scrap pieces of metal, threw stones at Israeli police deployed outside the mosque. Police then entered the area, firing tear gas, rubber bullets and stun grenades, some of which entered the mosque. Police said stones thrown at officers also landed near the Western Wall, where thousands of Israeli Jews had gathered to pray.

The Palestinian Red Crescent said more than 305 Palestinians were hurt, including 228 who went to hospitals or clinics for treatment. Seven of the injured were in serious condition.

Al-Aqsa Mosque was built in an area known to Muslims as the Noble Sanctuary and called Temple Mount by Jews. It is considered one of the holiest places for Islam and Judaism. Tensions in the area have led to violence in the past, including the last Palestinian intifada, or uprising.

Monday's conflict was the latest after weeks of clashes between Palestinians and Israeli troops during the Muslim holy month of Ramadan. Most recently, the tensions have increased with the planned removal of Palestinians from the Sheikh Jarrah neighborhood of east Jerusalem.

Hamas is an Islamic militant group that has fought three wars against Israel since it took control of Gaza in 2007. The group possesses missiles and rockets able to strike many areas in Israel.

The rocket strike on Jerusalem comes as Prime Minister Netanyahu has been unable to form a new government.

Netanyahu also pushed back against international criticism Monday. He said Israel wants to ensure the rights of worship for all.

The Associated Press, Reuters, and Agence FrancePresse reported this story. Hai Do adapted it for VOA Learning English. Mario Ritter Jr. was the editor.

drone –n. a small aircraft that flies without a pilot

mosque –n. a building that is used for Muslim religious services

stun grenade –n. an explosive device that produces a very loud sound and a bright light

clinic –n. a place where people go to get medical help