< Growing Cities in Western US Search for Water
Update Required To play the media you will need to either update your browser to a recent version or update your Flash plugin.
By Dan Friedell
24 August 2021


Many Americans are moving to the southern and western United States, despite extreme heat and a limited supply of water.

The population of Greeley, Colorado, and the surrounding area grew by 30 percent between 2010 and 2020. It is one of the fastest growing parts of the U.S., reports the latest U.S. census.

Dick Maxfield has lived in Greeley for 60 years. During those years, he has seen the population increase by 300 percent, reaching almost 110,000.

People come to the town because there are good jobs and homes that are less costly than those in nearby Denver. But there is not enough water.

"Anything we can do to protect our safe water supply is so important," Maxfield said.

Lisa Dilling is a water researcher and a professor at the University of Colorado. She said climate change makes the problem of population growth and not enough water even more difficult.

"Where is the water going to come from?" Dilling asked. "We can still have growth, but we need to make sure we're thinking ahead."

The lack of rain and extreme heat in the western U.S. is being called a "mega drought."

Some communities there are taking extreme steps to protect their water supply.

In Oakley, Utah, a town outside of Salt Lake City, officials ended home building because the water system was at its limit.

Dick Jefferies is part of a conservation group called Trout Unlimited. He said the only thing that will stop the growth is a lack of water. "It's a limited resource," he said.

Many cities in states like Colorado got their start because of rivers. The founders of Greeley picked the location because it was where two rivers came together. Now those rivers, and others nearby, are drying up.

Federal officials recently declared a water shortage on the Colorado River, which provides water for 40 million people in the western part of the U.S.

So, the city is working to find a new water source – underground – about 100 kilometers away. But taking water from a natural underground source known as an aquifer is both costly and controversial. 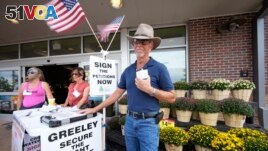 There is also the possibility that the water they find will have too much uranium, a radioactive material that can cause illness. Some say there are ways to remove uranium from the water, others think the risk is too great.

Greeley, however, said the water from the aquifer will not be the city's first water source.

"Greeley would never deliver unsafe drinking water to its residents, including any water that had detectable uranium,″ he said.

Those who oppose the water plan are trying to organize a vote in November.

Citizens of Greeley seem split. One person said she did not think town officials would do anything bad. "They live here, too," said Aimee Huston.

But Sandi Cummings said the plan was "so upsetting that we are even considering this."

Jokerst said it is the city's responsibility to provide water to its residents. He added that the project will give Greeley the water it needs to continue growing.

"We have all the ingredients for developers to build here," he said.

Even with plans and water testing, two experts say Greeley's plan may not be perfect.

Jeff Lukas studies water and climate in Colorado. He said taking water from the aquifer may be risky because it is far away and the water is hundreds of meters below ground.

Jeff Crane studies river water projects in Colorado. He said Greeley and other cities are going to keep running into water problems.

"They're trying to figure out how to continue to grow ... without more water. Something's got to give."

Matthew Daly wrote this story for the Associated Press. Dan Friedell adapted it for Learning English. Susan Shand was the editor.

What would you do about the lack of water in the western U.S.? Tell us in the Comments Section and visit 51VOA.COM.

despite –prep. without being prevented by (something)

census –n. the official process of counting the number of people in a country, city, or town and collecting information about them

drought –n. a long period of time during which there is very little or no rain

conservation –n. the protection of animals, plants, and natural resources

controversial –adj. relating to or causing much discussion, disagreement, or argument : likely to produce controversy

radioactive –adj. having or producing a powerful and dangerous form of energy (called radiation)

detect –v. to discover or notice the presence of (something that is hidden or hard to see, hear, taste, etc.)

ingredient –n. a quality or characteristic that makes something possible

got to give –expression. to break because of force, pressure, or strain