< Global Warming Causes Earlier Pollen Season
Update Required To play the media you will need to either update your browser to a recent version or update your Flash plugin.
By Anna Matteo
15 February 2021

When Dr. Stanley Fineman started as an allergist, he told patients to start taking medications and prepare for pollen season in the middle of March.

That was about 40 years ago. Today, he tells them to start around the middle of February.

Since 1990, pollen season across the United States and Canada has been starting earlier, about 20 days earlier. And pollen loads, the amount of pollen released by plants, are 21 percent higher.

The main reason for this, a new study found, is global warming.

Other studies have shown North America's allergy season getting longer and worse. But this one, published in the Proceedings of the National Academies of Sciences, has the most complete information coming from 60 reporting stations. It is also the first study to make scientific connections between an earlier and more intense pollen season with human-caused climate change.

The study says the warmer the Earth gets, the earlier spring starts for animals and plants, especially plants that release pollen. Additionally, trees and plants produce more pollen when they get carbon dioxide. 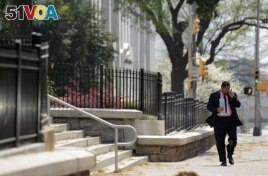 FILE - A pedestrian walks down a street as pollen litters the sidewalk outside the State Capitol Tuesday, March 20, 2012, in Atlanta. (AP Photo/David Goldman)

Bill Anderegg is the lead writer of the study. He said, "climate change is here and it's in every breath we take." The University of Utah scientist told the Associated Press (AP), "This is clearly warming temperatures and more carbon dioxide putting more pollen in the air."

Scientists are not sure why trees are giving off the allergy-causing particles earlier than grasses. But Anderegg said just look at cherry blossoms opening earlier in Japan and Washington, D.C. as an example.

Scientists involved in the study also considered that parks and cities were getting greener. They also compared what is happening now in our environment to computer models of an Earth without human-caused warming and rising carbon dioxide in the air.

Since 1990, about half of the earlier pollen season was linked to climate change — mostly from warmer temperatures. But plant-feeding carbon dioxide, Anderegg said, played a part.

Chris Downs of St. Louis, Missouri does not need a study to show that he already has problems with breathing, headaches, and red itchy eyes. His allergies usually hit in March. But the last two years, they came in early February, along with blooms of trees and flowers.

"As a kid I never saw anything start blooming in February," Downs said, "Now I see a handful of years like that."

For Amir Sapkota, this is not just a matter of sneezing and watery eyes. There are more serious health concerns. The University of Maryland scientist said the pollen is a risk for other diseases including asthma.

She told the AP, "Asthma costs the U.S. economy an estimated $80 billion per year in terms of treatment and loss of productivity." So, a longer pollen season is a threat to both "individuals suffering from allergies as well as the U.S. economy."

There are other problems as well. Sapkota recently found a connection between earlier spring allergies and an increased risk in asthma hospitalizations. Another study, Anderegg said, found that students do worse on tests because of pollen levels.

The U.S. Centers for Disease Control and Prevention has some advice on how to protect yourself against pollen:

Seth Borenstein reported this story for the Associated Press. Anna Matteo adapted it for VOA Learning English. Hai Do was the editor.

allergist – n. a specialist in allergy

pollen – n. the very fine usually yellow dust that is produced by a plant and that is carried to other plants of the same kind usually by wind or insects so that the plants can produce seeds

carbon dioxide – n. a gas that is produced when people and animals breathe out or when certain fuels are burned and that is used by plants for energy

sneeze – v. to suddenly force air out through your nose and mouth with a usually loud noise because your body is reacting to dust, a sickness, etc.

asthma – n. medical : a physical condition that makes it difficult for someone to breathe