< Gingko Leaves Teach Scientists About Climate During Dinosaurs Days
Update Required To play the media you will need to either update your browser to a recent version or update your Flash plugin.
By Anna Matteo
29 August 2021


As scientists try to understand the future of our warming planet, critical information may be found in the past.

At the Smithsonian Natural History Museum, Richard Barclay opens a metal drawer. Inside are fossils that are nearly 100 million years old. The scientist holds a rock, and inside the rock is an ancient leaf. He easily recognizes the plant.

"You can tell this is ginkgo. It (is) a unique shape," he said. "It has (not) changed much in many millions of years."

Barclay told a writer for the Associated Press that the leaf fell off a tree when Tyrannosaurus rex and triceratops walked through prehistoric forests. 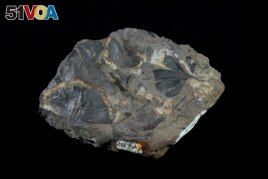 A Late Cretaceous ginkgo leaf fossils from Alaska's North Slope is seen at the National Museum of Natural History in Washington, Friday, June 4, 2021. The Smithsonian is using the ginkgo to study climate change. (AP Photo/Carolyn Kaster)

Ginkgo trees are that old. Gingko leaves are special for another reason. Their fossils often contain actual plant material and not simply a leaf's shape. So, they may help scientists understand ancient climate systems and as a result the possible future of our warming planet.

Of special interest to scientists are something called "hothouse" periods. These are periods of time when they believe carbon levels and temperatures were much higher than they are today.

One such hothouse time took place during the late Cretaceous period, which was about 66 million to 100 million years ago. This was the last period of dinosaurs -- before a meteor hit the Earth and most animals died out.

Learning more about ancient hothouse climates can give scientists valuable information to test models that predict future climates. But climate information about the distant past is limited. Air trapped in ancient ice permits scientists to study carbon dioxide levels. But those samples only go back about 800,000 years.

That is why the Smithsonian's ginkgo leaves are so important. For example, the collection contains a leaf from 1896. That is around the time when the Industrial Revolution started changing the climate.

This leaf has the same shape of the 100-million-year-old leaf. However, one big difference can be seen with a microscope - how the leaf has reacted to changing carbon in the air.

The AP story explains that on a leaf's underside are very small holes or pores. They are designed to take in carbon dioxide and respire water. This lets the plant turn sunlight into energy. When there is a lot of carbon in the air, the plant needs fewer pores to take in the carbon it needs. When carbon levels drop, the leaf produces more pores.

Today, scientists know that the worldwide average level of carbon dioxide in the atmosphere is about 410 parts per million. And Barclay knows what that makes the leaf look like. He also knows what ginkgo leaves looked like before humans had greatly changed the planet's atmosphere.

Now he wants to know what pores in the fossilized ginkgo leaves can tell him about the atmosphere 100 million years ago.

So, he is running an experiment in a forest in the state of Maryland, near Washington, D.C.

He and his team are growing ginkgo trees in a way that lets them experience natural weather – rain, sunlight, and the changing of seasons. But the team has the ability to change levels of carbon dioxide in the air.

Some trees are growing at current carbon dioxide levels. Others are growing at much higher levels – about the same as levels in the distant past, and maybe similar to levels that will be seen in the future.

"We need something to compare with," Barclay said. If there are similarities between leaves in the experimental forest and the fossil leaves, the researchers will have a general guide to the ancient atmosphere.

Christina Larson reported this story for the Associated Press. Anna Matteo adapted it for VOA Learning English. Ashley Thompson was the editor.

unique – adj. used to say that something or someone is unlike anything or anyone else : very special or unusual : belonging to or connected with only one particular thing, place, or person

carbon – n. a chemical element that forms diamonds and coal and that is found in petroleum and in all living plants and animals

respire – v. of a cell or tissue : to take up oxygen and produce carbon dioxide through oxidation

compensate – v. to provide something good as a balance against something bad or undesirable