< Germany Wants to Bring 400,000 Skilled Workers From Overseas
Update Required To play the media you will need to either update your browser to a recent version or update your Flash plugin.
By Ashley Thompson
24 January 2022


The COVID-19 pandemic has led to labor shortages and weakened economies around the world. Leaders in Germany hope that foreign workers can help the country recover.

Germany's new coalition government says it wants to bring 400,000 skilled foreign workers to the country each year. The government hopes this will help the country deal with its lack of workers as well as an aging workforce.

Christian Duerr is parliamentary leader of the co-governing Free Democrats. He told the business publication WirtschaftsWoche, "The shortage of skilled workers has become so serious by now that it is dramatically slowing down our economy." 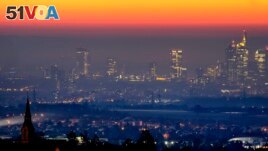 The church of Kronberg lies above the banking district of Frankfurt, Germany, Wednesday, Dec. 22, 2021. (Photo/Michael Probst)

He added, "We have to reach the mark of 400,000 skilled workers from abroad as quickly as possible."

Chancellor Olaf Scholz's Social Democrats, Duerr's FDP and the environmentalist Greens agreed in their deal on measures like a points system for specialists from countries outside the European Union. They also agreed to raising the national minimum pay to 12 euros ($13.60) an hour to make working in Germany more appealing.

The German Economic Institute estimates that the labor force will shrink by more than 300,000 people this year. More older workers are retiring than there are younger workers entering the labor market.

A shrinking labor force could also affect Germany's public pension system. Pensions are earnings a person makes after they no longer work. Fewer employees will be responsible for financing the pensions of a growing number of retirees who are living longer than ever.

abroad - n. in or to a foreign country