< German Female Gymnasts Wear Body-Covering Unitard in Olympics
Update Required To play the media you will need to either update your browser to a recent version or update your Flash plugin.
By Ashley Thompson
27 July 2021


The clothes that the German women's gymnastics team wore during the start of Olympic competition in Tokyo looked similar to the others. The lights shined off crystals across their front and down their arms. But the team's new Olympic clothing did not stop at their hips.

For years, female gymnasts have worn leotards: clothing that covers the body except for the legs. But in the opening round of Olympic competition, the German team wore unitards. This kind of clothing covers the whole body, including the legs.

Team members have said their choice was meant to push back against the sexualization of women in gymnastics.

Male gymnasts wear clothes that cover more of their body. They wear loose shorts for their floor exercise and vault, and long pants on the bar events and pommel horse.

Sarah Voss is a 21-year-old German team member. She said the team was not sure whether they would wear unitards in the Olympic competition until they got together before the event.

"We sat together today and said, OK, we want to have a big competition," Voss said. "We want to feel amazing, we want to show everyone that we look amazing."

Their clothing choice has been widely praised. But so far it has not started a trend. All other female gymnasts at the Tokyo Games have chosen to wear the usual leotards. 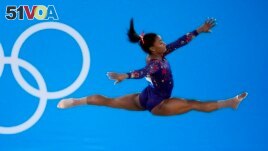 American superstar Simone Biles said last month that she chooses to wear leotards because they make her appear taller.

But she added: "If anyone out there wants to wear a unitard or leotard, it's totally up to you."

Matt Cowan is with GK Elite, the United States' biggest leotard manufacturer. He said most requests for unitards come from countries where women cover up their bodies for cultural and religious reasons. He said the company has so far not seen a major rise in interest in the unitards.

Gymnastics is sometimes considered a sport best performed by young women. Biles is 24 years old. She often jokes about being old. She recently called herself a grandma on social media.

But many teams at this year's Olympics have older members. The average age of the U.S. female gymnasts this year is 20.8.

The oldest gymnast this year is Uzbekistan's Oksana Chusovitina, who is 46. She is taking part in her eighth Olympic Games.

The German team includes three women in their 20s and one in their 30s. German gymnast Voss said the sport and its clothing should be accepting of female bodies as they age and change.

The German team's Olympic unitards met the clothing rules of the International Gymnastics Federation. But not all female athletes are as free to cover their bodies.

Days before the Olympics began, the Norwegian women's beach handball team refused to play wearing very small, bikini, shorts during European competitions. They chose to wear close-fitting shorts instead. They received a fine for violating the sport's clothing requirements.

The Associated Press reported this story. Ashley Thompson adapted it for VOA Learning English. Mario Ritter, Jr. was the editor.

sexualization - n. the act of seeing someone or something in sexual terms

gymnastics –n. a sport in which athletes are judged on how well they perform different physical exercises on a floor mat or on special equipment

crystal –n. a small piece of glass that catches light and is shiny

vault –n. a sports event involving jumping over a pole or special piece of equipment

trend –n. a general direction of change; something that is currently popular

athlete –n. a person who is trained in a sport, game or exercises that require physical skill and strength