< German Scientists Make Mice Walk Again
Update Required To play the media you will need to either update your browser to a recent version or update your Flash plugin.
By Susan Shand
26 January 2021


German researchers have found a way to regrow nerves of mice that could not walk, permitting them to walk again. The mice had been paralyzed because of injuries to their spinal cords.

The researchers used a designer protein injected into the brain. It recreates a link in the brain that scientists had always believed could not be repaired once broken. 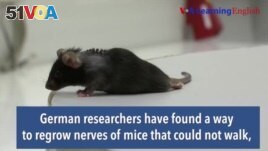 Spinal cord injuries in humans are often caused by sports or car accidents. The injuries leave them paralyzed because some of the nerves that move information between muscles and the brain are not able to grow back.

The researchers from Ruhr University Bochum were able to cause the paralyzed mice's nerve cells to grow back using the designer protein.

The special thing about the protein is not only that it is used to cause the damaged nerve cells to regrow, "but that it is also carried further (through the brain)," the team's leader Dietmar Fischer told Reuters.

The nerve cells regrow and that is "the reason why the mice can walk again," he said.

The paralyzed mice that received the treatment started walking after two or three weeks, he said.

The treatment involves injecting genetic information into the brain to make the protein, called hyper-interleukin-6, the university's website reported.

The team is investigating if the treatment can be improved. "We also have to see if our method works on larger mammals. We would think of pigs, dogs or primates, for example," Fischer said.

If they are successful working with larger mammals, then the scientists could try the treatment for humans. That, however, "will certainly take many, many years," he said.

The Reuters News Agency reported this story. Susan Shand adapted it for Learning English. Mario Ritter, Jr. was the editor.

paralyzed – adj. unable to move or feel a part of the body

spinal cord – n. a large group of nerves that runs through the center of the spine and that carries messages between the brain and the rest of the body

mammal – n. a kind of animal that gives its young milk and has hair

primate – n. a group of animals that includes monkeys, apes and humans