< German Mushrooms Still Contain Radiation Linked to Chernobyl Disaster
Update Required To play the media you will need to either update your browser to a recent version or update your Flash plugin.
By Bryan Lynn
12 October 2021


Most wild mushrooms collected in Germany in recent years still showed radioactive contamination from the Chernobyl nuclear disaster. But the country's food safety agency says most samples did not contain radiation levels above legal limits.

In 1986, a reactor at Ukraine's Chernobyl nuclear power center exploded and caught fire. The accident -- the world's worst nuclear disaster -- sent huge amounts of radiation into the air. It sent radioactive particles across large parts of Europe. 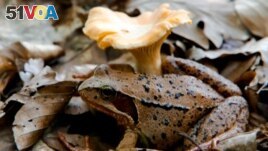 In this file photo, a wood frog rests beside a chanterelle mushroom in the forest at Medvednica mountain overlooking Zagreb June 6, 2011. (REUTERS/Nikola Solic/File Photo)

Investigators at Germany's Federal Office of Consumer Protection and Food Safety, or BVL, tested many different kinds of mushrooms. They measured levels of two kinds of radioactive isotopes -- cesium-137 and cesium-134. The isotopes are byproducts of the production process in nuclear reactors.

Of the mushrooms tested that are marketed to humans, none contained levels above the legal limit of 600 becquerels of radiation per kilogram, the BVL reported. A becquerel is a unit of radioactive measurement.

Some additional mushrooms that grow in the wild were tested and shown to have levels above 1,000 becquerels of cesium-137 radiation per kilogram in the last three years, the country's Office for Radiation Protection reports. It urged individuals seeking to limit radiation exposure not to self-pick wild mushrooms in affected areas.

The agency noted, however, that even if a person ate 200 grams of mushrooms with 3,000 becquerels of cesium-137 per kilogram, this would be about equal to the radiation exposure received during a flight from Germany to Spain.

Higher radioactivity levels in mushrooms were found in southern Germany, especially in Southern Bavaria and the Bavarian Forest, the BVL said.

Officials said the radioactive material stays in forests so long because those environments recycle nutrients very effectively. This means that wild mushrooms show contamination levels for much longer periods than other agricultural products.

Concern about the long-term effects of nuclear disasters has fueled public opposition to nuclear power in Germany. The country decided to halt its nuclear power industry in 2011, shortly after the accident at Japan's Fukushima nuclear power center.

Reuters reported on this story. Bryan Lynn adapted the report for VOA Learning English, with additional information from Germany's Federal Office of Consumer Protection and Food Safety. Hai Do was the editor.

contaminate – v. to make something dirty or poisonous

isotope – n. a form of atom that has a different atomic weight from other forms of the same atom but the same chemical structure

unit – n. a single thing or a separate part of something larger

expose – v. to subject to risk from a harmful action or condition

recycle – v. to use something again for a different purpose