< Gene Editing Used to Block Mosquitos’ Ability to Identify Targets
Update Required To play the media you will need to either update your browser to a recent version or update your Flash plugin.
By Bryan Lynn
22 August 2021


Scientists say they have used gene editing to block the ability of mosquitos to identify human targets.

The method is described in a new study led by American researchers. The scientists say the study could lead to major developments in the fight against mosquito-borne diseases such dengue, yellow fever and Zika.

Such diseases -- carried by the Aedes aegypti mosquito -- kill hundreds of thousands of people each year.

The researchers say their study is the first to closely examine the way mosquitoes use their sight to identify targets to bite. The study was recently published in Current Biology.

The research centered on the Aedes aegypti mosquito, which bites during the daytime. Other kinds of mosquitos, including Anopheles, hunt mostly at night. Anopheles are responsible for spreading malaria. 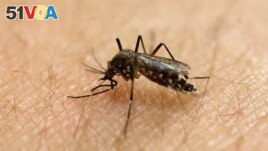 In this Jan. 18, 2016, file photo, a female Aedes aegypti mosquito, known to be a carrier of the Zika virus, acquires a blood meal on the arm of a researcher at the Biomedical Sciences Institute of Sao Paulo University in Sao Paulo, Brazil. (AP Photo)

Female Aedes aegypti search out blood meals in humans to develop eggs. They use several different senses to find those meals. One of the main identifying tools is the smell of carbon dioxide (CO2). When a human breathes out CO2, the mosquitoes become more active and begin looking for targets to bite.

The research team said this search generally begins with the mosquito flying toward the direction of the released CO2. When seeking out targets, the insects search for dark objects. Once the mosquitoes are within close range, they can also sense heat from skin and additional skin smells to help guide them to a human.

The researchers used the CRSPR/Cas-9 gene editing method to remove two out of five light-sensing receptors in the mosquitoes' eyes. They say taking away these receptors blocked the ability of the female Aedes aegypti to recognize dark targets.

Craig Montell is a professor at the University of California, Santa Barbara, who helped lead the research. He said in a statement that by removing the two eye receptors, the team was able to "eliminate CO2-induced target recognition without causing blindness."

Experiments were carried out with the mosquitoes in cages and in wind tunnels. The team observed the insects' movements toward light or dark markers to confirm that the gene editing method had changed their behavior.

The team then carried out a series of tests to confirm that the gene-edited mosquitoes had not simply gone blind. The experiments involved observing the insects' reactions to light, as well as taking voltage measurements from electrodes connected to their eyes.

The results of those tests showed that the gene-edited mosquitoes could not only still see, but they could also identify different shades and motion.

Another leader of the study was Yinpeng Zhan, a postdoctoral researcher at the University of California, Santa Barbara. He said the research findings could have a wide effect on a series of insect disease carriers that can harm humans.

"Vision plays an important role in detecting a potential host for blood-feeding insects such as mosquitoes, kissing bugs, tsetse flies and ticks," Zhan said. "And this study is the first to uncover the molecular mechanisms behind this behavior."

Next, the team says it will seek to identify other receptors used by Aedes mosquitoes to search out and feed on human targets.

Bryan Lynn wrote this story for VOA Learning English, based on reports from UC Santa Barbara and Current Biology. Susan Shand was the editor.

eliminate – v. to remove or take away

induce – v. to cause a particular condition

cage – n. a container used to keep birds or animals

tunnel – n. a round, enclosed passageway

shade – n. a color, especially as related to how dark or light it is

vision – n. the act of power of seeing

detect – n. to discover or notice something

mechanism – n. a part of a piece of equipment that does a particular job