< Gardener Explains Growing Filberts or Hazel Trees
Update Required To play the media you will need to either update your browser to a recent version or update your Flash plugin.
By Gregory Stachel
04 October 2021


In the past few years, Lee Reich, a well-known gardener, has planted several sorts of nuts, including Hazelnuts. Hazelnuts come from the hazel tree. They are often eaten and ground into a mixture that can be spread.

Hazelnuts are also known as filbert nuts, especially from the European sort. After planting the young trees, Reich found they produced their first nuts within three years. Sadly, the nuts could not be eaten. They were small and did not taste good. He did find the catkins, the male flowers, to be beautiful in the winter. And each autumn, the trees' leaves turned to bright colors.

A few years after planting those trees, he planted more hazels. The newly planted trees were from a sort that was made to produce large flavorful nuts. They come from the European hazel trees. They are found around the Mediterranean area of Europe or in the northwest of North America. They produce the nuts that are found in supermarkets. 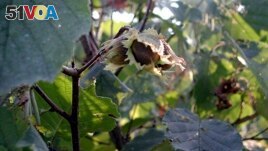 In this image provided by Lee Reich shows hazelnut plants in New Paltz, NY. In late summer, gardeners and animals wait for hazelnuts to become ready to eat. (Lee Reich via AP)

A disease called filbert blight is what has historically kept people from growing filberts in the eastern United States. Blight is a name for any plant disease.

The blight causes a collapse and death of the branches. The disease can go years without being seen due to its long lifetime. It can be ten years before a tree is killed.

Cutting off infected branches, or pruning, and spraying chemicals are two ways to deal with blight.

The disease found its way to commercially grown filbert trees in northwestern North America. This created the need to find sorts of hazels that are resistant.

Two trees were identified early on: Hall's Giant and Willamette. Now, there are many that are resistant. Lee Reich plans to plant these resistant trees in his garden.

He keeps the young trees healthy by covering the ground with mulch and, if needed, providing nutrients. He removes some leaves and branches to start new growth and to stop diseases. This also permits all the branches to have light and air. He found these efforts create 15 to 25 centimeters of new growth. This growth permits continuously good nut production.

Lee Reich regularly writes about gardening for The Associated Press. He has also written several books, including "Growing Figs in Cold Climates" and "The Pruning Book."

Lee Reich reported this story for The Associated Press. Gregory Stachel adapted it for VOA Learning English. Susan Shand was the editor.

garden – n. an area of ground where plants (such as flowers or vegetables) are grown

nut – n. a small dry fruit with a hard shell that grows on trees, bushes, etc.

bump – n. a small raised area on a surface

spray – v. to put a stream of small drops of liquid on (someone or something)

mulch – n. a material (such as straw, leaves, or small pieces of wood) that is spread over the ground in a garden to protect the plants or help them grow and to stop weeds from growing