< Function Words in Everyday Speech
Update Required To play the media you will need to either update your browser to a recent version or update your Flash plugin.
By John Russell
16 December 2021


Imagine you are using an internet service to watch American films. Perhaps you decide to watch Mixtape, a movie recently made by Netflix.

My gosh! This store is so rad!

You might ask yourself about the words you just heard. Why did the speaker say the word rad – a term that means very good or amazing – in a louder way? Why were some of the words said quietly and more quickly? 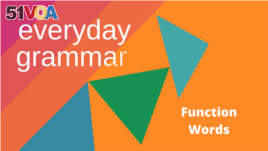 In today's report, you will learn about function words in everyday speech. Let's start with a few important terms and ideas.

What are function words?

Function words are words that have a grammatical purpose. Function words include pronouns, determiners, and conjunctions. These include words such as he, the, those, and the words and or but.

The function words are he, a pronoun, and the, an article.

These function words do not really give specific information. If you heard a person only say the words "he... the...," you would have a hard time understanding what they meant.

Now let's consider the other words in the statement – the content words.

Content words are words such as nouns, verbs, and adjectives.

The content words in our example are the phrasal verb picked up and the noun book.

If the statement only had content words, it would not be a complete sentence, but it would still communicate a general idea.

If our example only had content words, it would be this:

The importance of content words explains why Americans often reduce function words in everyday speech. Function words have a grammatical use but are less central to expressing specific meaning.

Listen again to our example and note how the function words are said more quickly and quietly.

Back to the film

Think back to the line from the film Mixtape:

My gosh! This store is so rad!

The first sentence has the word gosh, a kind of expression that shows excitement or surprise. This term is said a bit louder.

In the second sentence, note that the content words are spoken a bit louder as well, while the function words are said quietly and quickly.

Store, a noun, and rad, an adjective, are spoken most clearly. The word so is also spoken clearly because it helps to show the speaker's strong feelings.

If we took out some of the function words, the reduced statement would be:

This is not a complete sentence, but it does communicate the speaker's very general idea.

Note that the verb BE is treated almost like a function word. In other words, the speaker does not stress the verb BE. Instead of saying "This store is so rad," the speaker says something closer to "This store's so rad."

In today's report, we explored how and why function words are often reduced in everyday speech. Speakers often reduce function words because they want to draw the listener's attention to content words – the words that give the most specific meaning.

The next time you listen to Americans speak, pay careful attention to how they reduce function words. With time, you will notice regular, repeated ways in which English speakers express ideas.

And of course, make careful note of when speakers say function words more loudly and clearly. This act is often a clue that the speaker is making a correction or clarification.

conjunction – n. grammar : a word that joins together sentences, clauses, phrases, or words

exception – n. a case where a rule does not apply

clarification -- n. the act of making (something) clear or clearer