< French Restaurant Serves Up Food of the Future: Insects
Update Required To play the media you will need to either update your browser to a recent version or update your Flash plugin.
By Gregory Stachel
03 June 2021


A French cook is preparing foods with something surprising: insects. The European Union has recently approved some sorts of insects as an acceptable food product. Insects provide many nutrients and are an environmentally friendly food.

The food Laurent Veyet prepares is not for those with little bravery. However, what he is preparing may point to the future of feeding a growing world population.

One of his foods is a prawn salad with yellow mealworms. It includes insects on a bed of vegetables with grasshoppers covered in chocolate, a food usually meant for sweets.

The restaurant is located in Paris among others with outdoor seating and plenty of sunlight. Eaters who are ready to try something different approve of Veyet's complex foods.

The Parisian cook talked about the perfect meal for first-timers. He was preparing a pasta made with crushed mealworms, sweet potatoes and young insects cooked on the stove. He said, "there are some really interesting flavors. Not many people could say they don't like that." 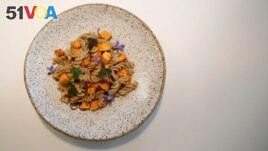 The European Food Safety Agency, EFSA, in January said the mealworm is acceptable for humans to eat. By May, EFSA approved its sale on the market.

The agency is considering more than 12 other requests to approve other insect-based food products. They include crickets and locusts, insects that are usually found in fields.

Mealworms, and insects more generally, could provide a sustainable food source that produces low greenhouse gases for the future.

Soheil Ayari was eating with his two daughters. He approved of the food. He said, "I feel like I am in a traditional restaurant." He said only the idea behind what he ate was different. He continued to say, "and honestly, the tastes are very similar (to traditional food)."

Veyet grows his mealworms on site. He feeds them cooked grains and vegetables. While the mealworm may not look like something worth eating, it is in fact the larvae of the darkling beetle. These beetles are rich in protein, fat and other nutrients.

The mealworm can be used in many different meals. It can be cooked whole and eaten, or it can be ground to help make foods like bread.

Stefan De Keersmaecker is a health and food safety spokesman at the European Commission. He said, "insects are nutritious." He also said that insects can help us change to a more healthy and sustainable diet and food system.

There are two battles Veyet must win. He needs to win over public opinion and learn how to combine the taste of insects with other foods.

He said that he must find the right taste as well as the right food combinations. He said that is very interesting to do and any cook would tell you the same.

Yiming Woo reported this story for Reuters. Gregory Stachel adapted it for VOA Learning English. Susan Shand was the editor.

mealworm – n. the larva of a darkling beetle

grasshopper – n. a plant-eating insect that has long legs used for jumping

flavor – n. the quality of something that you can taste

sustainable – adj. able to be used without being completely used up or destroyed

larva – n. a very young form of an insect that looks like a worm

beetle – n. a type of insect with wings that form a hard cover on its back when it is not flying