< France to Ban Wild Animals from the Circus
Update Required To play the media you will need to either update your browser to a recent version or update your Flash plugin.
By Bryan Lynn
30 September 2020


France says it plans to ban the use of wild animals in traveling circuses as part of new rules set to take effect "in coming years."

The new measures will also ban the keeping of dolphins and killer whales in captivity and make it unlawful for minks to be farmed for fur. 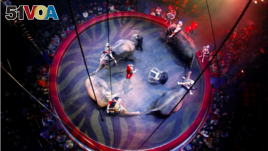 In this file photo, John Vernuccio of Italy and his elephants perform during the ‘History' show at the Arlette Gruss Circus in Bordeaux, February 4, 2014. (REUTERS/Regis Duvignau)

France's Environment Minister, Barbara Pompili, announced the changes earlier this week. She said that bears, tigers, lions, elephants and other wild animals would not be permitted to appear in traveling circuses in future years.

Pompili told reporters the measures would affect about 80 circuses that kept around 230 animals. The ban does not cover wild animals in other permanent shows or zoos.

Pompili did not set an exact date for the circus ban. But she said the process should start "as soon as possible." The bans are expected to take effect "gradually" over several years. "Putting a date on it does not solve all the problems," she said.

Pompili promised that solutions for each animal would be found "on a case-by-case basis." She noted the decision was made in an effort to protect animal welfare. "It is time to open a new era in our relationship with these animals," she said.

Pompili said the measures will also bring an end to mink farming - where animals are raised for their fur - within the next five years.

France, which has three public dolphin aquariums, will also not permit any new openings. It will also seek to close existing ones within seven to 10 years.

About 20 European countries have already banned or limited the presence of wild animals in circuses. In France, many cities already do not permit circuses with wild animal shows.

"Champagne bottles are being uncorked here. Thank you to all those who have helped bring this about," the group said.

Animal charity 30 Million Friends also welcomed the ban. It wrote on Twitter that the government had heard "the public's demands for the well-being of wild animals." The group said it wanted the measures to be pushed through as quickly as possible.

William Kerwich is head of a group representing animal shows. He told French television that he disagrees with the bans. He said the measures were "a knife in the back" of an industry already hurting from coronavirus crowd limits.

"It will put people out of work. And who will take care of the animals, they are born in captivity, they cannot be set free in the wild," he said on BFM television.

The animal rights group bearing the name of activist Brigitte Bardot said in a statement it would welcome all circus animals "who are currently kept captive and exploited in terrible circumstances."

The Associated Press, Reuters and Agence France-Presse reported on this story. Bryan Lynn adapted the reports for VOA Learning English. Ashley Thompson was the editor.

circus – n. a show involving a group of traveling performers and animals doing tricks for an audience

era – n. a period of time during which particular events or progress in development are common

aquarium – n. a building people can visit to see water animals and plants

uncork – v. open a bottle by pulling out its cork

charity – n. organization whose purpose is to give money or food or provide help in other ways

exploit – v. to use (someone or something) in a way that helps you unfairly

circumstance – n. a fact or event that makes a situation the way it is