< Former Child Solider in South Sudan Uses Humor to Help Heal
Update Required To play the media you will need to either update your browser to a recent version or update your Flash plugin.
By Bryan Lynn
05 August 2021


A former child soldier in South Sudan now aims to use humor to help others heal from emotional problems suffered during years of conflict.

The comedian, Kuech Deng Atem, said he also wants to educate soldiers on how to improve their relations with civilians. The 26-year-old spoke with VOA about how he tries to use laughter to put smiles on the faces of the South Sudanese people. 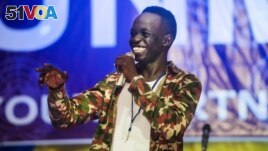 Atem said he hopes his jokes can disarm soldiers who harass citizens to get money from them.

One of Atem's jokes deals with what he said is a common experience of many people in South Sudan. It involves being stopped by officers on the road who make false accusations about registration documents. The officers then demand money from the drivers.

Atem is commonly known by his performing name of Wokil Jeesh Commando. He became a soldier when he was 10 years old. He and other children were trained in Aweil and Mapel and later joined the fighting in Heglig and Abyei in 2006. He told VOA that, in the beginning, child soldiers like him were mainly used to care for wounded soldiers and carry ammunition.

In 2008, Atem's mother followed him to Mapel and was able to bring him back home to Juba where he finally returned to school. That is where he started performing comedy and telling other students stories about life in the military.

"They would laugh, and teachers would come in sometimes and get me and be like, 'Tell me the story,'" Atem said. "I would tell them, and they would laugh."

He said once one of the teachers suggested that he try telling his stories in front of all the students in an assembly. "So I started doing this in the assembly, and people would laugh every morning. That's when I discovered that I could do stand-up comedy," Atem told VOA.

Atem said he has won several awards for comedians in South Sudan.

He is currently studying information technology in his final year at Juba's Starford International University. He said if his mother had not taken him out of the army, he might still be looking for the next war to fight in.

Atem is urging the South Sudan government to take steps to prevent children from being recruited into the army. Young people should be permitted to study so that later, if they choose to join the army, they will be educated soldiers who can make good decisions.

He added that comedy is one way to help ease the stress that many South Sudanese feel after living through years of civil war. He said he hopes one day to become an international success, so he can take his humor to other parts of the world to help people forget their painful past experiences.

Winnie Cirino reported on this story for VOA News. Bryan Lynn adapted the report for Learning English. Mario Ritter, Jr. was the editor.

comedian – n. a person who performs in front of an audience and makes people laugh by telling jokes or funny stories or by acting in a way that is funny

harass – v. to continue to annoy or upset someone over a period of time

assembly – n. a regular meeting of all the students and teachers at a school

skit – n. a short, funny play that makes a joke of something

recruit – v. to persuade someone to join a company, organization or armed forces

stress – n. a state of mental tension and worry caused by problems in your life, work, etc.