< For Palestinians in Gaza: Nowhere to Run
Update Required To play the media you will need to either update your browser to a recent version or update your Flash plugin.
By Dan Novak
13 May 2021


As fighting intensified this week between Israeli and Palestinian forces, residents of Gaza are once again facing the question: Where can we go to escape the violence?

Casualties grew this week during the worst violence between Israel and the Gaza Strip since a 2014 war. More than 87 Palestinians have been killed in Gaza since Monday, including 18 children and eight women, Gaza's Health Ministry reported. Among the dead were both militants and civilians. More than 500 people have been wounded.

Israeli bombs hit Umm Majed al-Rayyes' apartment building in Gaza City on Wednesday, throwing her from her bed. As walls exploded and windows broke, the 50-year-old gathered her four children and tried to find a place to hide.

"This whole territory is a tiny place. It's a prison. Everywhere you go, you're a target," said al-Rayyes, who said she was able to seek shelter in a neighbor's house. She said the Israeli airstrike came without warning.

Gaza is a small, crowded piece of land with more than 2 million people. There are no air raid warnings or safe houses. Temporary shelters built by the United Nations have been destroyed during years of conflict. 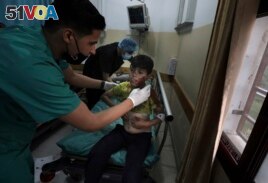 A medic treats a wounded boy following an explosion in the town of Beit Lahiya, northern Gaza Strip, on Monday, May 10, 2021, during a conflict between Hamas and Israel. (AP Photo/Mohammed Ali)

At a Gaza City hospital, one woman said Israeli missiles hit her two-story building on Wednesday. She said the strike killed her 4-year-old grandson and pregnant daughter-in-law.

"They bombed them without any warning. The house had nothing but the kids," she cried at the hospital.

The Israeli government has long accused Hamas of using civilians as human shields. Militants often launch rockets from civilian areas and set up command centers inside residential buildings. Yet Israel received heavy criticism for bombing residences during the 2014 war with Hamas.

Gaza residents say they feel nowhere is safe and they cannot leave the area. Since Hamas took control in 2007, Gaza has been under an Israeli-Egyptian blockade.

Along its borders, Gaza is surrounded by fences, concrete walls, and steel barriers. To the east lies the Mediterranean Sea, where Israel restricts Palestinian boats from traveling too far.

Zeyad Khattab is a pharmacist in Gaza City. He fled to the family home in central Gaza where he grew up along with 12 relatives when bombs hit his apartment building.

During the 2008 and 2014 wars, airstrikes shook Khattab's apartment building and broke some windows. But on Wednesday, the building -- which houses around 400 people -- collapsed.

"There is always this undercurrent of anxiety, but this time is different," he said.

This week's fighting grew out of violence in Jerusalem at the Al-Aqsa Mosque and Dome of the Rock. Experts have long warned that growing tensions at the site, which is holy to both Muslims and Jews, could lead to wider conflict.

There is growing fear that the latest fighting will turn into a longer war. Missiles from Hamas and other militant groups have sent hundreds of thousands of Israelis running to bomb shelters across the country. Some missiles have reached Israeli cities, killing at least seven people.

In any other year, the streets of Gaza City would be crowded with Palestinians ahead of the Eid al-Fitr holiday, which started Wednesday evening. The holiday is one of the biggest Muslim festivals of the year and marks the end of the holy month of Ramadan. Markets and restaurants would be full. Families would be enjoying the beaches.

Instead, shops were closed. The city's streets remained nearly empty except for emergency vehicles and Hamas security forces. Bombs exploded in the distance.

Saud Abu Ramadan is an independent journalist in Gaza City. "It's the same atmosphere of 2014," he said.

He was speaking about the 7-week war that killed more than 2,000 Palestinians, including hundreds of civilians, and destroyed much of Gaza. "Warplanes are buzzing, and people are just trying to keep their heads down."

Al-Rayyes, who fled her falling apartment building in Gaza City, said the latest fighting had brought "so much pain" to the territory. "But thank God the children have been through this before and they're strong," she said.

She then corrected herself. "They're pretending to be strong."

Isabel Debre and Fares Akram reported this story for the Associated Press. Dan Novak adapted it for VOA Learning English. Bryan Lynn was the editor.

resident -n. a person who lives or has their home in a place

blockade -n. an act of war in which one country uses ships to stop people or supplies from entering or leaving another country

concrete -n. a hard, strong material that is used for building and made by mixing cement, sand, and broken rocks with water

pharmacist -n. a person who is trained to prepare and give out medicines in a hospital or storeundercurrent -n. a hidden feeling or tendency that is usually different from the one that is easy to see or understand

anxiety -n. fear or nervousness about what might happen

pretend -v. to act as if something is true when it is not true