< Florida Law Seeks to Control Large Social Media Companies
Update Required To play the media you will need to either update your browser to a recent version or update your Flash plugin.
By Susan Shand
26 May 2021


Republican Governor Ron DeSantis of Florida signed a bill this week that seeks to punish social media companies that remove "conservative ideas" from their networks.

Whether the bill violates the U.S. Constitution's First Amendment remains unclear. The First Amendment prevents government from limiting "the freedom of speech or of the press." 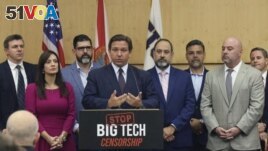 Florida Gov. Ron DeSantis gives his opening remarks - prior to signing legislation that seeks to punish social media companies that remove "conservative ideas" from their networks - in Miami on Monday, May 24, 2021. (Carl Juste/Miami Herald via AP)

DeSantis said some of the social media companies were using "power over our population that really has no precedent in American history."

He also accused the companies of wanting to suppress "ideas."

It is unclear if Florida will be able to enforce the law. Federal law prevents internet companies from being taken to court for removing posts. And federal law always overtakes state law when there is a conflict.

Section 230 of the federal Communications Decency Act says internet companies cannot be taken to court for removing material that is obscene, violent or "objectionable," among other things.

You remove "the president of the United States, but you let Ayatollah Khamenei talk about killing Jews, that is wrong," DeSantis said.

NetChoice, an organization that represents technology companies, criticized the new law in a statement.

"This bill takes us closer to a state-run internet where the government can... pick winners and losers," said NetChoice vice president Carl Szabo.

He added that the new bill was meant to "punish" social media companies because of a belief that they are "anti-conservative."

The bill targets social media companies that have more than 100 million monthly users. These include Twitter and Facebook. Lawmakers, however, said websites of amusement park owners, like Disney and Comcast, would not be subject to the law.

The new Florida law will most likely not hold up against the constitution, said Computer and Communications Industry Association President Matt Schruers.

While DeSantis says his new law protects free speech, Schruers said that an internet company that does not want to have Nazis or other objectionable people on its service "is exercising its own First Amendment rights."

Florida Democrats opposed the bill. They defended the right of social media companies to control information on their platforms.

Democratic Senator Audrey Gibson said in a statement that the bill was passed to please Trump. Other Republican-run states are considering similar bills after Facebook and Twitter banned the former president for violating their standards.

She said the companies "take responsibility" for what appears on their services and "have the right to do so."

precedent – n. something done or said that can be used as an example or rule to be followed in the future

post – n. to add (a message) to a social media platform

obscene – adj. relating to sex in an indecent or offensive way

censor – v. the act of examining books, movies, letters, etc., and removes things that are considered to be offensive, immoral, harmful to society, et

standard – n. level of quality, achievement, etc., that is considered acceptable or desirable