< Floods Hit Crowded Refugee Camps in Bangladesh
Update Required To play the media you will need to either update your browser to a recent version or update your Flash plugin.
By Jill Robbins
29 July 2021


Heavy rains have fallen for days on Rohingya refugee camps in southern Bangladesh. The floods have destroyed houses and sent thousands of people to live with relatives or in large shelters.

In a 24 hour period this week, more than 30 centimeters of rain fell on the camps in the Cox's Bazar area. It is where more than 800,000 Rohingya refugees live, the United Nations refugee agency said. In one day, the area received more than half the usual monthly rainfall. There is a prediction of more heavy rain in the coming days. The monsoon season of heavy rains stretches over the next three months.

The agency said the situation is even worse because of the COVID-19 pandemic. "There is currently a strict national lockdown in response to rising cases across the country," the agency said. 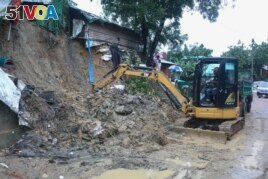 Rohingya refugees and others look on as machinery is used to remove debris after a landslide triggered by heavy rains in a camp at Ukhiya in Cox's Bazar district, Bangladesh, Tuesday, July 27, 2021

It said six people died in the camps earlier this week. Five people died in a landslide caused by the rains and a child was carried away by floodwaters.

The U.N. High Commissioner for Refugees (UNHCR) said the heavy rain affected more than 12,000 refugees and it destroyed about 2,500 shelters. More than 5,000 refugees have temporarily moved into other family members' houses or community shelters, the agency said in a statement.

Hannah Macdonald, a spokesperson for the UNHCR, said in an email that emergency teams have moved into the camps to help.

Refugees said they were struggling to eat and drink properly. Khatija Begum is the mother of five children. She said, "Due to the continuous rainfall for the last four days, today my house is full of water. We are not even able to eat." Begum said she fears her children will drown and die in their sleep.

The refugee agency said the bad weather, landslides and floods have increased the suffering and humanitarian needs of the Rohingya refugees in Bangladesh.

Cyclones, heavy monsoon rains, floods, landslides and other natural dangers affect the camps every year. More than 700,000 Rohingya have fled to refugee camps in Bangladesh since August 2017. That period marked the beginning of a military campaign in neighboring Myanmar against the Muslim ethnic group. The campaign followed an attack by rebels against Myanmar government forces. Myanmar is a Buddhist-majority country.

The campaign included rapes, killings and the burning of thousands of homes. Human rights groups and the United Nations called the campaign ethnic cleansing. While Bangladesh and Myanmar have tried to negotiate the return of the refugees, the Rohingya are too fearful to return home.

The International Organization for Migration says Cox's Bazar, where more than 1 million Rohingya refugees live, is likely to have more disasters.

Julhas Alam wrote this story for the Associated Press. Jill Robbins adapted it for Learning English. Mario Ritter, Jr. was the editor.

cyclone – n. an extremely large, powerful, and destructive storm with very high winds that turn around an area of low pressure

strict –adj. describing a command, rule or something that must be obeyed

lockdown - n. a state of isolation or restricted access put in place as a security measure.

response – v. something done that is a reaction to something else; an answer or reply

What do you think of the heavy rains falling in many parts of the world? Are there heavy rains where you live this summer? We want to hear from you. Write to us in the Comments Section.