< Fishing Ships Find Safe Haven in Cameroon
Update Required To play the media you will need to either update your browser to a recent version or update your Flash plugin.
By Dan Friedell
29 July 2022


The large fishing boat called the Trondheim pulls in tons of mackerel and sardines as it moves in the Atlantic Ocean from Nigeria to Mauritania. It flies the flag of Cameroon, a West African nation.

The boat, however, has no real connection to Cameroon.

The Trondheim was once called the King Fisher when it sailed under the flag of the Caribbean nation St. Vincent and the Grenadines. Later, it was registered in the former Soviet Union country of Georgia. 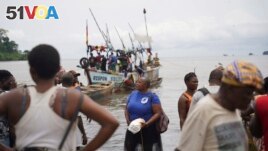 Fishmongers from Limbe, Cameroon, and neighboring communities wait at the shore for fishing boats to arrive with their catch at the shore on Limbe, on April 12, 2022. (AP Photo/Grace Ekpu)

Reporters with The Associated Press wrote about a system called "flags of convenience." They found that the Trondheim is one of the many ships that recently had their registration changed to Cameroon. The companies that own the ships change countries often because they are seeking less regulation, or official rules they must follow.

The AP studied 80 ships and their registrations using a service called MarineTraffic. The AP report notes that environmental groups have accused a number of the ships of illegal fishing practices.

The illegal acts include catching too much fish or not being truthful about the kinds of fish caught.

The Associated Press reports that 14 of the ships, including the Trondheim, are owned by companies based in the European Union.

Because it flies Cameroon's flag, however, the African nation is responsible for overseeing the Trondheim's activities.

But that is a problem. Last year, a study that appeared in the publication African Security showed long-running corruption in the ministries that oversee Cameroon's fishing industry.

Also last year, the European Commission issued a warning to Cameroon known as a "yellow card." The commission said Cameroon should work harder to stop illegal fishing. If Cameroon does not make some changes, the commission can issue a "red card" and ban fish caught by the country's boats from entering European markets.

Data from two companies that follow the fishing and shipping business show Cameroon had just 14 ships registered in 2018. This year, it has 129 registered ships. Documents also show that the budget for the Cameroonian ministry that oversees fishing dropped 32 percent from 2019 to 2021.

The United Nations has a rule in place that requires a real link between a boat and the flag it uses.

A representative from Cameroon's agency that oversees fisheries, Paul Nkesi, would only say the government recognizes the need to increase its oversight of the boats. But he said the boats are all legally registered.

Julien Daudu works for the Environmental Justice Foundation in Britain. He said the practice of "flags of convenience ... (is) easy, cheap, you can do it quickly."

One concern about all the new ships with Cameroon's flag is that they will hurt the fishing boats that are truly run by local fishermen. The large boats owned by European businesses are all at least 100 meters long and work in the waters along the whole African coast.

"They can fish more than 1,000 local boats," said Simeon Oviri. He is a fisherman who works on the coast near Douala, Cameroon's largest city.

Another concern is that the large ships are catching some small fish that some consider overfished along the Atlantic coast of West Africa.

Maurice Beseng is a researcher at the University of Sheffield in Britain. He said many of the small fish are an important food source for people living in African countries. Fish like anchovy and sardines get sent to Europe as fish meal and fish oil. But if they stayed in Africa, they would be eaten by about 6.7 million people who depend on them for food.

The AP worked to follow 14 of the large ships to their owners in Malta, Belgium, Latvia and Cyprus. The AP also worked with other news groups around the world to look into "flags of convenience" and illegal fishing. Some of the ships turned out to be owned by companies linked to a fishing scandal in Senegal from 10 years ago.

The past flags of the large fishing boats are not well documented, observers say. The countries that registered the boats in the past do not seem interested in helping regulators follow the boats when they change names and countries.

‘A lot of loopholes'

Beatrice Gorez works with the Coalition for Fair Fisheries Arrangements. Her group worked to show the connections between European businesses and the newly added boats to the Cameroonian fleet.

She said the flag changes came after the European parliament put strong rules in place. The regulations were put in to keep watch over European boats that fish in the waters of other countries.

She said the rules are a good idea, but the boats can "slip out" by changing their flags.

Beseng said that even though EU rules may be based on good ideas, "there are a lot of loopholes." A loophole is a problem in the way a rule is written that makes it possible for people to legally avoid following it.

Daudu said even for investigators, it is hard to find the history of the fishing boats. He called the information "well concealed," or hidden.

"It would cost a lot of time, Daudu said. "Sometimes it's so well concealed that you can't even find information."

Dan Friedell adapted this story for VOA Learning English based on a report by the Associated Press.

convenience –n. a quality or situation that makes something easy or useful for someone by reducing the amount of work or time required to do something

regulation –n. an official rule or law that says how something should be done

oversight –adj. the act or job of directing work that is being done

loophole –n. an error in the way a law, rule, or contract is written that makes it possible for some people to legally avoid obeying it

scandal –n. an occurrence in which people are shocked and upset because of behavior that is morally or legally wrong

fleet –n. a group of ships or vehicles that move or work together or that are controlled or owned by one company

slip –n. to get away from something quietly

conceal –v. to hide from sight