< First Details about First Moon Rocks Brought to Earth Since 1970s
Update Required To play the media you will need to either update your browser to a recent version or update your Flash plugin.
By Bryan Lynn
10 October 2021


A Chinese scientist has shared some details about moon rock samples the country brought to Earth late last year.

The samples were collected by China's unmanned Chang'e 5 spacecraft, which launched to the moon on November 23, 2020. It returned to Earth 24 days later, bringing back about 2 kilograms of moon rocks and dust.

The material was collected from an area known as Oceanus Procellarum, or Ocean of Storms, on the western edge of the near side of the moon. The area is believed to have had intense volcanic activity in ancient times. Some of the samples were collected from the surface, while others came from a drilling operation that reached about 2 meters deep.

The mission made China only the third nation to collect lunar samples, following the United States and the Soviet Union. The last such mission happened in 1976, when an unmanned Soviet spacecraft collected 170 grams of moon material. 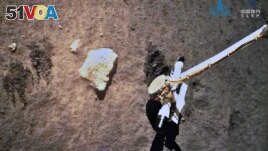 This picture taken on Dec. 2, 2020 and released on Dec. 3, 2020 by the China National Space Administration (CNSA) via CNS shows the Chang'e-5 lunar probe gathering samples on the moon.

America's Apollo program - which first put humans on the moon - landed 12 astronauts over six flights from 1969 to 1972. Those missions resulted in astronauts collecting 382 kilograms of rocks and soil.

Scientists from China's Lunar Exploration and Space Engineering Center have been examining the new samples. They are seeking to find out how old the material is and what compounds it contains. The team hopes the information can help answer questions about the moon's past volcanic history. It may also provide information about when the moon might have lost its magnetic field.

Some of the samples were sent to China University of Geosciences, where doctoral student Yugi Qian took part in the examinations. Qian recently provided information on the material during a presentation at the Europlanet Science Congress.

Qian described the moon samples as "very diverse," saying they included several different kinds of rock material and minerals. About 90 percent of the material was considered "local," meaning it came from the landing site or its immediate surroundings.

Qian said the local samples were mostly made up of "mare basalts." These dark gray rocks are believed to be the result of ancient volcanic activity that took place over much of the near side of the moon. This finding was expected because of what we already know about the moon's history.

But the scientists noted that the other 10 percent of the material is considered "exotic." These samples contain very different chemical substances than the local materials, the team reported. Qian said among these are "distant impact" materials that could have landed in the area as a result of space objects hitting other areas.

The team identified other exotic parts of the sample as "volcanic beads." A statement by the Europlanet Society on Qian's findings suggests this material might be linked to areas already identified as volcanic eruption sites. One of the sites could have been up to 230 kilometers away from where the Chinese spacecraft landed, the team reported.

The statement said the samples may help scientists better understand "records of other parts of the lunar surface, as well as hints of the types of space rocks that have impacted the moon's surface." The exotic pieces may also provide more information on the age of the area around the Chang'e 5 landing site, it added.

"All of the local and exotic materials among the returned samples of Chang'e-5 can be used to answer a number of further scientific questions," Qian said. He added that with the rocks and dust, "we shall deepen our understanding of the Moon's history and help prepare for further lunar exploration."

Bryan Lynn wrote this story, based on reports from the Europlanet Society, Reuters, The Associated Press, NASA and a presentation by Yuqi Qian at the Europlanet Science Congress meeting. Susan Shand was the editor.

drill – v. to use a tool or machine to make holes in a hard substance

lunar – adj. of or relating to the moon

diverse – adj. made up of people or things that are different from each other

impact – n. the force or action of one object hitting another

bead – n. a small, round piece of glassy material

eruption – n. the bursting out of material from a volcano

hint – v. to suggest something, but not in a direct way