< Fires Increase on Pacific Islands
Update Required To play the media you will need to either update your browser to a recent version or update your Flash plugin.
By John Russell
18 August 2021

From Micronesia to Hawaii, wildfires have been a growing problem for many years. With little financing to prevent and deal with these fires, island communities have struggled to control the problem.

Clay Trauernicht of the University of Hawaii said that on tropical islands, fires have strong effects. These fires can, in his words, wreak havoc – meaning to cause much destruction or confusion - because the native environment evolved without regular fires. 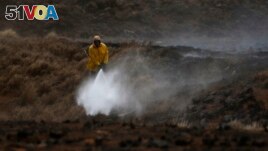 A Big Island firefighter puts out a blaze near Waimea, Hawaii, on Thursday, Aug. 5, 2021. The area was scorched by the state's largest ever wildfire. (AP Photo/Caleb Jones)

"Fires were very rare prior to human arrival on any Pacific island. ... And so when you do get these fires, they tend to kind of wreak havoc," Trauernicht said.

But it's not just burnt land that is affected. Island fires harm areas from the top of mountains to below the ocean's surface.

Trauernicht said that soil gets carried away during heavy rainstorms after the fires have removed all the plant life, which has an effect even on ocean life and coral reefs.

The wet season on tropical islands also causes some grasses to grow tall and thick, building fuel for the next summer's wildfires.

A recent wildfire on Hawaii's Big Island burned about 1 percent of the state's total land, and other islands in the Pacific such as Palau, Saipan and Guam burn even more — up to 10 percent in some years.

Guam, like many other places, has long used fire as a tool. Farmers sometimes use it to clear fields, and hunters have been known to burn areas while hunting illegally.

The U.S. territory's forestry chief Christine Camacho Fejeran said fires on the island are mostly caused by arson, or illegal burning. "So, all of Guam's wildfires are human-caused issues, whether it's an intentional or an escaped backyard fire or another (cause)," she said.

On average, Fejeran said, 2,430 to 2,830 hectares of the island burn each year, amounting to about 5 percent of its land.

Back in Hawaii, Kumu Micah Kamohoalii said of a recent fire, "I've never seen a fire this big,"

Kamohoalii's family has lived in the area for many generations.

He suggested that the environment has changed during his lifetime.

"When I was young, all of this was always green," Kamohoalii said. "In the last 10 to 15 years, it has been really, really dry."

Trauernicht, the University of Hawaii wildfire expert, suggested that climate change is one of the reasons for the fires in Hawaii.

In addition to education and arson prevention, he said, changes in land use — such as reforestation that reduces some grasses — could help.

"It's within our control, potentially, to reduce the impacts that we're seeing with fires," Trauernicht said. "Both in terms of forest loss as well as the impacts on coral reefs."

Caleb Jones and Victoria Milko reported on this story for the Associated Press. John Russell adapted it for Learning English. Susan Shand was the editor.

tropical – adj. of, relating to, occurring in, or used in the tropics

tourism – n. the business of providing hotels, restaurants, entertainment, etc., for people who are traveling

intentional – adj. done in a way that is planned

impact – n. a powerful or major influence or effect