< Fewer Europeans Using Coronavirus Tracing Apps than Expected
Update Required To play the media you will need to either update your browser to a recent version or update your Flash plugin.
By Bryan Lynn
26 September 2020


Smartphone apps designed to slow spread of the coronavirus have experienced low usage rates in Europe, where virus cases are again rising in several countries.

The tracing systems are designed to let people know if they were near someone who was later confirmed to have the virus. Some nations moved quickly to develop such apps. The apps are considered an important tool in helping defeat the coronavirus. 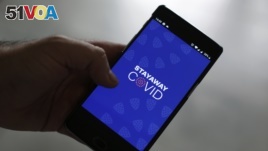 A man shows the contact tracing app Stayaway Covid on his cellphone, in Lisbon, Thursday, Sept. 17, 2020. The smartphone app uses Bluetooth technology to help discover whether people have been in close proximity to someone infected with COVID-19. (AP Photo)

One reason the new coronavirus spreads easily is because many infected individuals show few or no signs of sickness. If a person learns they had been near someone who got infected, they could immediately isolate or seek treatment.

But few people in Europe have used the apps. Some countries there have discontinued them. Other nations have said low usage rates make the technology ineffective.

On the high end, about one-third of the population uses the apps in Finland and Ireland. In Germany, about 22 percent of people use them. But in France, the usage rate is just 4 percent.

In the beginning, health officials targeted about 60 percent of the population. That goal was based on an Oxford University study published in April. Research models in the study predicted the virus spread could be stopped if at least 60 percent of populations used the contact tracing apps. The study suggested that even with lower usage levels, the number of coronavirus cases and deaths could be reduced.

Most European tracing apps are based on smartphone technology developed by Google and Apple. The apps use Bluetooth wireless technology to permit devices that are near each other to exchange information. The technology creates a record of the Bluetooth signals. Device users who have become infected can share that information to warn others about the possibility of infection.

Smaller countries in Northern Europe have been most successful at getting people to voluntarily use the apps. People living in those countries generally have higher levels of trust in the government. Those countries are also likely to have more people willing to accept new technologies.

Finland's app quickly became one of Europe's most popular when it launched at the start of September. It received about 1 million downloads within the first 24 hours. Currently, about one-third of the country's 5.5 million people have the app.

Some Finnish users said they thought that getting the app was an important civic responsibility. "It's our duty to take care of the health of our fellow citizens and those close to us," said William Oesch, a 44-year-old photographer in Helsinki.

France's app uses a centralized data storage system. Privacy activists have criticized that method. The app has a usage rate of just 4 percent.

Officials in Norway were forced to halt that country's app because of privacy concerns over its use of phone location data.

German officials admit that the country's tracing app has experienced technical issues and some users had difficulties using it. But they note that the system has also seen success. Health Minister Jens Spahn said the app was used to send 1.2 million coronavirus test results from laboratories to users during its first 100 days.

"The faster transmission of test results makes a huge difference," Spahn said. He noted that the tracing of possible contacts is more effective the sooner it begins. Almost 5,000 people with positive test results had used the app to warn others they had been near, Spahn added.

Officials say they plan to improve the warning message the app sends to users. The aim is to provide clearer guidance on what those users should do next.

The Associated Press reported on this story. Bryan Lynn adapted the report for VOA Learning English. Ashley Thompson was the editor.

app – n. a program for a smartphone or other device that performs a special function

isolate – v. to separate from other people or things

trace – v. to find the origin of something

fellow – adj. used to describe people who share the same interests or situation

location – n. a place or position

transmission – n. the process of passing something from one person to another

positive – adj. in a medical test, positive means the person being tested has a disease or condition