< FDA Approves First Long-Acting HIV Drug Combo
Update Required To play the media you will need to either update your browser to a recent version or update your Flash plugin.
By Bryan Lynn
25 January 2021


The U.S. government has approved the first long-acting drug combination treatment for HIV, the virus responsible for the disease AIDS.

The treatment was approved by the Food and Drug Administration (FDA) last week. It involves monthly injections to replace daily pills now used to control HIV. 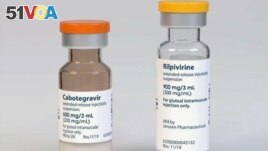 These illustrations, provided by drugmaker ViiV Healthcare on Thursday, Dec. 10, 2020, shows a rendering of the packaging and vials containing its new HIV treatment, Cabenuva, approved by the U.S. Food and Drug Administration on Thursday, Jan. 21, 2021. (

HIV is a virus that is spread through body fluids. Sexual contact can spread the disease but so can infected blood and blood products.

The two-injection combination treatment is called Cabenuva. The drug is expected to make it easier for people to receive their HIV medicines and to do so with more privacy. The injections mark a big change from methods used in the past. Those treatments required patients to take multiple pills several times a day, carefully timed around meals.

Dr. Steven Deeks is an HIV specialist at the University of California, San Francisco. He told The Associated Press that the new treatment can make patients' lives better because it is only needed once a month. "People don't want those daily reminders that they're HIV infected," Deeks said.

Cabenuva contains rilpivirine which is sold as Edurant by Janssen, a company owned by Johnson & Johnson. It also contains a new drug called cabotegravir. It is made by ViiV Healthcare. The two are sold together and given as separate injections once a month. The drug is also being tested for use every two months.

The FDA approved Cabenuva for use in adults who have had their disease controlled by other HIV medicines and have not shown signs of viral resistance to the two drugs in Cabenuva.

The agency also approved a pill version of cabotegravir to be taken with rilpivarine for one month to ensure the drugs do not cause bad effects.

ViiV said the injection combination would cost $5,940 for a higher, first dose. The cost would then drop to $3,960 each month. The company said this price was similar to what one-a-day pill combinations cost now. How much each patient pays depends on their insurance, income and other things.

Dr. Judith Currier is an HIV specialist at the University of California, Los Angeles. She said studies on the new treatment found that patients greatly favored the injections. "Even people who are taking one pill once a day just reported improvement in their quality of life to switch to an injection," she said. Currier is an advisor to ViiV and wrote a commentary about one study on the drug in the New England Journal of Medicine.

Deeks said long-acting injections also give hope of reaching groups that have a hard time carrying out daily treatment. He said that includes people with mental illness or substance abuse problems. "There's a great unmet need" that the injections may fill, he added.

Separately, ViiV plans to seek approval for the use of cabotegravir to prevent HIV. Two recent studies found that cabotegravir injections given every two months were better than daily Truvada pills for keeping uninfected people from catching the virus.

The Associated Press reported this story. Bryan Lynn adapted the report for Learning English. Mario Ritter, Jr. was the editor.

pill – n. a small, hard piece of medicine that you swallow

reminder – n. something that makes you remember something else

dose – n. the amount of something, such as a medicine, that is needed to have the expected result

insurance – n. an agreement in which a person makes payments to a company and the company promises to pay money if the person is sick, injured or dies

switch – v. to change from one thing to another