< Fast-spreading Coronavirus Variants Raise Concerns
Update Required To play the media you will need to either update your browser to a recent version or update your Flash plugin.
By Hai Do
27 January 2021


Worldwide coronavirus cases passed 100 million Wednesday as countries struggle with new variants of the virus and a limited supply of vaccine.

The worst-affected countries include the United States, India, Brazil and those in Europe. More than 2.1 million people have died from COVID-19, based on information from the Johns Hopkins University Coronavirus Center.

At this time, the U.S. Centers for Disease Control and Prevention (CDC) says there is no evidence that new coronavirus variants cause more severe illness or increased risk of death.

However, the CDC adds that scientists are still working to understand how easily the new forms might spread. They also want to find out whether they might cause more severe illness or whether currently approved vaccines will protect people against them.

Three of the new coronavirus variants were found to have come from three countries: Britain, South Africa and Brazil. 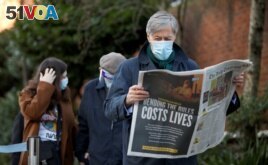 A man reads a newspaper as he waits to enter Lord's Cricket Ground to receive the coronavirus vaccine, in London, Britain, Jan. 22, 2021.

In Britain, a coronavirus variant known as B.1.1.7 was first recognized in September 2020. It quickly spread in southern Britain including London. It has since spread throughout Europe, the United States and Canada.

Health organizations say this variant spreads more easily and quickly than others. But there is no evidence that it causes more severe illness or increased risk of death.

In South Africa, another variant called 501Y.V2 was found in early October. There have been cases caused by this variant in 20 countries including Australia and Canada, but not in the U.S.

The variant is also known as B.1.351 and shares some genetic changes similar to the one in Britain. Scientists are concerned that antibodies from a small number of people who had recovered from COVID-19 or received a vaccine were less effective against this variant.

The P.1 coronavirus variant was first identified in four travelers from Brazil who were tested at Haneda airport outside Tokyo in January. The variant, however, could have been around much earlier in Brazil and has spread to many countries including Germany and South Korea. This week, the U.S. has also confirmed its first case of the variant in Minnesota.

The CDC says early evidence shows that antibodies from a coronavirus infection or vaccine might not have the ability to recognize the P.1 variant.

What causes the variants?

Daniel Rhoads is a microbiologist and pathologist with the Cleveland Clinic. He said, "Although this is concerning, it's not really surprising – we've been watching for this and more or less expecting it."

Earlier in the pandemic, other variants including D614G and L452R appeared. However, the new variants are receiving attention now because they seem to spread more easily and quickly, which may lead to more cases of COVID-19. Another concern is whether approved vaccines like those from Pfizer and BioNTech or Moderna could be effective against them.

Caitlin Rivers is an epidemiologist at the Johns Hopkins Center for Health Security. She told the Associated Press, "I'm worried that the variants might be throwing us a curveball." That means the variant could present an unexpected and difficult problem.

Moderna announced on Monday that it is testing an additional booster of its vaccine against the new variants. Pfizer, which makes a similar COVID-19 vaccine, said its study shows the shot to be effective against the variant in Britain, but questions remain about those found in South Africa and Brazil.

American drug-maker Johnson and Johnson plans to report its vaccine study next week. The late-stage trials are being held in the United States, South Africa and Brazil. Scientists expect the results will show how well it works against the new variants.

What can be done?

The CDC says it is working with other public health agencies to monitor the situation closely and to look for new COVID-19 variants. It also has workers on the ground to study and investigate the new variants.

The health agency advises that increasing public health measures such as vaccination, physical distancing, use of cloth coverings and hand washing will help limit the spread of the new variants.

On Tuesday, the U.S. announced that it has banned travelers from Europe, Britain, Brazil, Ireland and South Africa. Other countries on the restricted list include China and Iran.

In Europe, Belgium has banned all nonessential travel until March. And France may soon begin a third lockdown if its 12-hour daily curfew does not slow the spread of new infections.

Hai Do wrote this report for VOA Learning English. Mario Ritter, Jr. was the editor.

variant –n. something that is different in some small ways from others of the same kind

booster –n. an additional amount of medicine or vaccine that increases resistance to disease

monitor –v. to watch or observe carefully over time for a special purpose