< Facial Recognition Technology Helps Solve Crimes, Raises Privacy Concerns
Update Required To play the media you will need to either update your browser to a recent version or update your Flash plugin.
By Gregory Stachel
27 June 2021


Big technology companies like Amazon have said they are limiting their sale of facial recognition software to law enforcement agencies.

Clearview AI has not. It is a private company based in New York City. Clearview AI provides a facial recognition search engine that contains 3 billion images taken from the internet. The search engine identifies images of people's faces. The company says more than 3,000 law enforcement agencies use the software.

Hoan Ton-That is the chief executive and co-founder of the company. He said, "The way it works is very similar to Google, but instead of putting in words, you're putting in photos of faces, and it will find anything publicly available on the internet that looks like that face."

Police say facial recognition software is an important tool in fighting and solving crimes. But its increasing use has raised concerns that there are too few rules in place for when and how police can use it.

Limits on the software

Police usually have image search engines which can look at drivers' license pictures or other images among police records.

Clearview AI has billions of images gathered from social media and other sites. Internet companies have said the images were taken by breaking their rules. However, Clearview AI's Ton-That said that the company only takes publicly available information.

Clearview AI describes a case on its website in which federal agents were able to identify a man suspected of sexual abuse of a girl from one image using its search engine.

Ton-That said the software has also been used to identify suspects who stormed the U.S. Capitol in January. 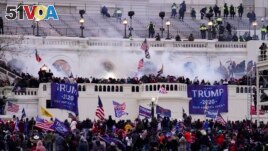 He said Clearview AI was useful in the investigation of many people who may not have had pictures in police databases.

A search using Clearview AI's search engine takes about one second. Ton-That said police were able to quickly identify the suspects from the January 6 incident. They could also reduce false results and speed up the investigation process.

When protests against police methods happened in the United States last year, Amazon and some other companies banned sales of facial recognition technology to law enforcement. They have not said when they will restart.

The American Civil Liberties Union, or ACLU, is a nonprofit, rights group. It has brought legal action against Clearview AI in Chicago and in California.

Kate Ruane is a lawyer for the ACLU. She said facial recognition technology makes it possible for the government to watch every part of citizens' lives.

Federal, state and local governments, she said, "do admit that they use it, but they don't tell us how, when or how often."

She said there needs to be more laws and supervision. She is calling for a total freeze on the technology until then.

In recent months, lawmakers have introduced bills that would limit police use of data they buy that is "illegally obtained."

Ton-That agrees that there needs to be more openness and even rules for the technology's use. But he does not think it should be banned for police use. He said it has been successful in solving crimes.

Ton-That also says that people who use the system must agree to observe its rules. He said messages that appear in the software help prevent its misuse.

Ton-That said his company does not sell its software to foreign governments. He mainly serves law enforcement agencies in the U.S.

Ton-That said the company has worked with some other private organizations for investigative purposes but they have decided to stay with law enforcement. He said, "it's the easiest, most explainable and best use case of our technology."

Julie Taboh reported this story for Voice of America. Gregory Stachel adapted it for VOA Learning English. Mario Ritter, Jr. was the editor.

license – n. an official document, card, etc., that gives you permission to do, use, or have something

obtain – v. to gain or get (something) usually by effort