< Facebook Hit with Major Outage, Accusations from Former Employee
Update Required To play the media you will need to either update your browser to a recent version or update your Flash plugin.
By Bryan Lynn
05 October 2021


Facebook suffered a major outage Monday that blocked the company's 3.5 billion users from its social media and messaging services. The company blamed the nearly six-hour outage on problems related to a "configuration change" made by its engineers.

The outage affected Facebook's main services, as well as the company's Instagram and WhatsApp products. The service outage was the largest ever recorded by the company Downdetector, an online internet website tracker.

Facebook said there was no evidence the outage was the result of an internet attack, and it appeared that no user data was endangered. It apologized to its users and said it was working to understand more about the cause.

Several Facebook employees who wanted to remain anonymous spoke to Reuters news agency about the outage. They said they believed it was caused by a mistake inside an area of the company that controls how internet traffic is routed to its systems. 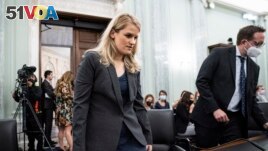 The outage came one day after a former employee went public with her identity after providing secret documents about the company to The Wall Street Journal. The former data scientist, Frances Haugen, appeared Sunday night on the CBS television program 60 Minutes.

The documents Haugen provided suggested that Facebook's own research had shown how the company's products and decisions can be harmful to users.

Haugen also reached out anonymously to federal law enforcement to investigate Facebook. She provided company documents that she said showed how Facebook magnifies hate and misinformation and fuels political division. Haugen says Facebook has been dishonest in its public declarations about its efforts to fight hate speech and misinformation.

The documents also showed that the company was aware that Instagram can harm the mental health of girls and young women.

On Tuesday, Haugen discussed her criticisms of Facebook in front of the United States Senate Commerce Subcommittee on Consumer Protection. In her testimony, she accused Facebook's leaders of failing to make changes based on the research because they chose to put company profits above the safety of users.

In written testimony provided to the Senate group, Haugen said Facebook's leadership "knows how to make Facebook and Instagram safer, but won't make the necessary changes because they have put their astronomical profits before people."

She added: "Congressional action is needed. They won't solve this crisis without your help."

The Senate subcommittee is examining Facebook's use of its own research on Instagram that suggests possible harm for some of its young users, especially girls. The company has publicly downplayed such harmful effects.

Research included in documents provided by Haugen suggests some females between 13-19 years old who heavily use the popular photo-sharing service feel increased peer pressure. This can lead to mental health and body-image problems. In some cases, this can result in eating disorders and suicidal thoughts, the research showed.

One Facebook study showed that 13.5 percent of girls and young women said they feel Instagram can make thoughts of suicide worse, while 17 percent said it can make eating disorders worse.

Haugen said she decided to go public and speak out because of her belief that "Facebook's products harm children, stoke division and weaken our democracy."

configure – v. to arrange something or change the controls on a computer or other device so it can be used in a particular way

track – v. to record the progress or development of something

anonymous – adj. not giving a name

route – v. to send something somewhere using a particular way or direction

magnify – v. to make something look larger or more important than it is

downplay – v. make something seem less important or less bad than it really is

peer pressure – n. the strong influence of a group on members of that group to behave as everyone else does

stoke – v. to urge bad ideas of feelings in a lot of people