< Facebook Board Upholds Trump Ban, But Demands Review of Action
Update Required To play the media you will need to either update your browser to a recent version or update your Flash plugin.
By Bryan Lynn
05 May 2021


Facebook's Oversight Board has decided to uphold the company's suspension of former President Donald Trump.

But in an announcement about its decision Wednesday, the board criticized Facebook for making the suspension "indefinite." It said the open-ended ban was ordered without clear standards. The board demanded that Facebook's leadership reexamine its decision and decide on another punishment that better fits the "gravity of the violation and the prospect of future harm."

The board gave the company six months to come up with a new penalty that agrees with current rules governing all Facebook users.

Facebook's semi-independent Oversight Board, which currently has 20 members, was established to rule on content-related matters. It was created after widespread criticism that Facebook was not effectively policing misinformation, hate speech and influence campaigns from outside groups or governments. 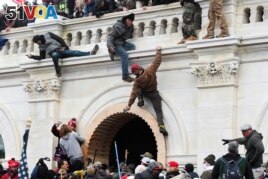 Supporters of U.S. President Donald Trump climb on walls at the U.S. Capitol during a protest against the certification of the 2020 U.S. presidential election results by the U.S. Congress, in Washington, U.S., January 6, 2021. REUTERS/Stephanie Keith

Trump's Facebook and Instagram accounts were suspended in January over statements he posted to the services. The companies said the posts risked fueling further violence following the January 6 storming of the U.S. Capitol by Trump supporters.

In the first post to supporters taking part in rioting at the Capitol, Trump said in a video: "I know your pain. I know you're hurt. We had an election that was stolen from us." He also said, "We love you. You're very special." In the video, Trump also said: "But you have to go home now. We have to have peace."

In the second post, as police were still in the process of securing the Capitol, he called his supporters "great patriots" and added, "remember this day forever."

The board said the language used in both posts clearly violated Facebook's rules against praising or supporting people taking part in violence.

By making repeated statements about election fraud with no evidence to back up his claims, Trump had "created an environment where a serious risk of violence was possible," the board said. His words of support to the rioters had "legitimized their violent actions," it added.

However, the board said it was not correct for Facebook to order an "indefinite" suspension with no clear steps for when or whether the account would be reestablished. It added that Facebook's action against Trump did not follow its own "clear, published" policies.

Facebook's vice president of global affairs and communications, Nick Clegg, said in a statement he was "pleased" that the board had upheld the basis for Trump's suspension. He added that the company's leadership will now consider the board's decision and come up with a new action that is "clear and proportionate."

In a statement posted Wednesday on his website, Trump did not specifically comment on the board's decision. Instead, he called out Facebook, Twitter and Google for being "corrupt" companies that "must pay a political price." He added: "Free Speech has been taken away from the President of the United States because the Radical Left Lunatics are afraid of the truth."

Trump was also banned from other major social media services after the Capitol rioting, including Twitter and Google-owned YouTube. Twitter had been Trump's favored medium for messaging throughout his presidency. Twitter has said its ban on Trump will remain, even if he runs for office again.

The board's decision has been watched for signals on how the world's largest social network will deal with rule-breaking world leaders in the future. This week, Twitter provided information about a public opinion study the company is carrying out to see how the public thinks it should deal with world leaders.

Since March, Twitter has been collecting input for the study. It said it had received nearly 49,000 answers in 14 languages. The study sought opinions on whether people believe that world leaders breaking Twitter's rules should face "greater or lesser" actions than other users. The company also asked whether it was ever correct for Twitter to permanently suspend the account of a current president or prime minister.

Twitter said it will process the data before releasing study results.

Bryan Lynn wrote this story for VOA Learning English, based on reports from The Associated Press, Reuters and Facebook. Hai Do was the editor.

indefinite – adj. with no fixed time, size, end or limit

standard – n. a level of quality that is considered acceptable

prospect – n. the possibility that something might happen in the future

penalty – n. a punishment for doing something that is against a law or rule

patriot – n. a person who loves and strongly supports or fights for his or her country

fraud – n. the crime of using dishonest methods to take something valuable from another person

proportionate – adj. a size or number directly related to something else