< Extremists Face Condemnation After Capitol Attack
Update Required To play the media you will need to either update your browser to a recent version or update your Flash plugin.
By Susan Shand
28 January 2021


In the past, right-wing extremism incidents mostly took place in rural parts of the United States.

They include when right-wing extremists occupied a federal bird sanctuary in Oregon in 2016. In 1992, there was a conflict between white separatists and federal agents in Ruby Ridge, Idaho. And in 1995, extremist Timothy McVeigh bombed a federal building in Oklahoma City and killed 168 people.

But the attack by rioters on the U.S. Capitol targeted the heart of American government. It also brought together large numbers of people who belong to extremist groups, giving them the chance to establish links to each other.

One expert said the incident might let them work together toward other violent actions. The events have "a radicalizing effect," said Brian Michael Jenkins. "The battle of Capitol Hill is now part of mythology," he added. Jenkins is a terrorism expert and adviser to the president of the RAND Corporation research center in California.

Mary McCord is a former acting U.S. assistant attorney general for national security. She said the environment for the attack had been building throughout the term of former President Donald Trump.

She listed the 2017 "Unite the Right" white supremacist demonstration in Charlottesville, Virginia in which one person was killed. She also listed demonstrations at state capitols by armed protesters angry about COVID-19 public health safety orders and mass shootings by people expressing racial or anti-government hatred.

"All have led to this moment," said McCord in an email to the Associated Press. She is now a visiting law professor at Georgetown University Law Center.

The Southern Poverty Law Center watches U.S. extremist groups. It has recorded a 55 percent increase in the number of what it calls white nationalist hate groups since 2017.

Among those who attacked the Capitol on January 6 were members of the Oath Keepers. They are an extremist group that seeks members among the military and police. The Proud Boys were there too. There were followers of QAnon, which spreads conspiracy theories, and people who are angry about race, religion and other issues.

"January 6th was kind of a Woodstock of the angry right," Jenkins said. Woodstock was a 1968 rock music performance that brought thousands of young people together. "The mere fact those groups were coming together...sharing this anger...it is going to have effects," he said. 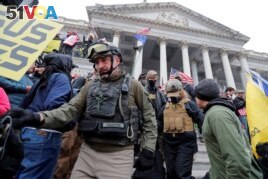 FILE - Members of the Oath Keepers are seen among supporters of U.S. President Donald Trump at the U.S. Capitol during a protest in Washington, Jan. 6, 2021.

Many extremists being held

The Federal Bureau of Investigation warned of planned armed protests at all 50 state capitals and in Washington for President Joe Biden's swearing in ceremony. That proved false. Some wonder if the groups have become less involved.

Also, Trump is no longer president and his social media reach has been blocked. Twitter has banned him. But now, some are clearly angry that Trump condemned the attack. They are also angry that he failed to come to the rescue of rioters who were arrested while he was still president. Many are still being detained and face serious charges.

On the internet, some people who were members of the Proud Boys appear to have turned against Trump. As an outgoing president, Trump did not pardon any of the many Capitol attackers. "No pardons for middle class whites," one angry extremist wrote on Telegram, a private messaging service.

Another said: "I cannot wait to watch the GOP completely collapse...a true nationalist movement will arise." GOP stands for Grand Old Party, a popular name for the Republican Party.

Believers in QAnon are also surprised that Trump left office without doing anything about their belief that the U.S. government is filled with evil people.

Among them was Ron Watkins, who helps run a website about QAnon conspiracy theories. "We gave it our all. Now we need to keep our chins up and go back to our lives as best we are able," Watkins wrote on Telegram.

Jenkins said he hoped extremist groups and other people who saw Trump as a leader would become a national movement. But the widespread condemnation of the Capitol attack could cause the movement to decrease.

"I think given the events of this past year, and especially what we've seen in the last couple of months, this puts us into new territory," Jenkins said. "And you don't put this back in the box that easily."

sanctuary – n. a place where someone or something is given shelter

conspiracy theories – n. a theory that explains an event or situation as the result of a secret plan by powerful people or groups

mythology – n. ideas that are believed by some people that are not true; ancient stories

mere –adj. showing that something is small or unimportant