< Explainer: How Are the Myanmar Protests Being Organized?
Update Required To play the media you will need to either update your browser to a recent version or update your Flash plugin.
By Susan Shand
09 February 2021


Protests in Myanmar against the military overthrow of the elected government have grown in recent days. But the country's military rulers have taken steps to make organizing the protests difficult or even illegal.

Here is a look at who is organizing the protests and the problems they face: 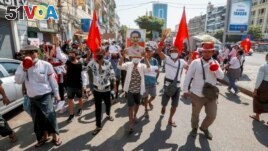 It was unclear for many days after the military overthrow on February 1 whether demonstrations were permitted or not.

But as the demonstrations grew and spread around the country, the military announced Monday it was banning peaceful public protests in the country's two largest cities.

Gatherings of more than five people were outlawed and curfews were put in place from 8 p.m. to 4 a.m. for areas of Yangon and Mandalay. Thousands of people have been demonstrating in those cities since Saturday.

The new restrictions have raised concerns about the possibility of a violent crackdown.

Who is leading the protests?

For the most part, the protests have grown without any clear leadership structure.

"This movement is leaderless -- people are getting on the streets in their own way and at their own will," said Thinzar Shunlei Yi, a well-known activist.

Activist groups, professional work groups, unions and others across Myanmar have all come out to protest. The demonstrators are supported by Aung San Suu Kyi's National League for Democracy party. Suu Kyi was ousted from power in the military takeover.

Myanmar experienced direct military rule for more than 50 years until 2012. Shortly after the latest military overthrow, a Facebook page called "Civil Disobedience Movement" started calling for peaceful protests. The page now has more than 230,000 followers. It is also widely used by Twitter users in Myanmar.

Health care workers also started a protest campaign. They are urging employees to refuse to work at state-run medical buildings.

Some people who live in Yangon have voiced their anger by making loud noises across the city at night.

What are the difficulties?

One of the biggest problems for protesters has been the military's attempts to block communications.

People have also been passing around information about how to keep communications secret and how to stay safe during protests.

Last weekend, the military temporarily cut internet services and some phone service. But many protestors were quick to overcome those problems, with some using phones registered in neighboring Thailand.

"Even when the internet was completely cut off on Saturday for 24 hours, people were able to communicate within Myanmar by phone," said Clare Hammond. She is a senior campaigner for the rights group Global Witness.

For others, simple word of mouth and an understanding of where demonstrations took place in earlier years has brought them out in protest.

Will the protests continue?

The protesters seem to remain operating without fear, even with the new restrictions in place on demonstrations.

Some are worried, however, that the military is preparing for a violent crackdown similar to those that ended past uprisings in 2007 and 1988.

Linda Lakhdhir is a legal advisor at Human Rights Watch. She said the military could try to use violations of the new rules, as well as existing laws, to justify another crackdown. She called the laws "draconian."

At times, police have used water cannons and non-deadly bullets at some protests, raising concerns about the possibility of additional government measures.

crackdown – n. a serious attempt to punish people for doing something that is not permitted