< Will North Korea’s New Missile Push US to Expand Missile Defenses
Update Required To play the media you will need to either update your browser to a recent version or update your Flash plugin.
By Mario Ritter Jr.
20 October 2020

Security experts say the missile appears designed to overpower U.S. missile defenses. They believe it may push the United States to add costly new anti-missile defenses to guard against the new weapon.

The missile was presented at a parade marking the 75th anniversary of North Korea's ruling Workers' Party.

Little is known about the weapon, which is being called the Hwasong-16. But experts say North Korea is likely trying to show it can put several nuclear warheads on a single missile. That would make intercepting such a weapon more difficult and costly for U.S. missile defense systems.

"If you have multiple warheads coming out of that single missile, you now have to have multiple interceptors for each incoming warhead," said Melissa Hanham. She studies North Korea's weapons program and is deputy director of the Austria-based Open Nuclear Network. 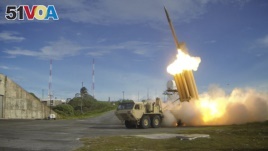 A Terminal High Altitude Area Defense (THAAD) interceptor is launched during a successful intercept test, in this undated handout photo provided by the U.S. Department of Defense.

The new ICBM, Hanham said, appears large enough to be deployed with many warheads. It is so large that it may also be able to hold decoys, which are meant to confuse anti-missile systems.

Hanham noted that such missiles are not only costly, but they increase the cost of defense systems designed to stop them. She added that it is less costly and easier to build a new missile than to create a missile defense system.

Andkit Panda is a nuclear policy specialist at the U.S.-based Carnegie Endowment for International Peace. He says the United States will have to spend hundreds of millions of dollars to keep up with changes in North Korea's growing force.

The United Nations expanded sanctions against North Korea in 2017 after the country carried out a series of nuclear and ICBM tests. The U.S. and North Korea were involved in nuclear negotiations in 2018 and 2019. But North Korea eventually walked away, angry at the U.S. refusal to ease the sanctions and provide security guarantees.

In January, General John Hyten, vice chairman of the Joint Chiefs of Staff, said he had "100% confidence" in their ability.

Markus Garlauskas and Bruce Perry are two former members of the U.S. intelligence community. They wrote that: "It is hard to see how Americans could be confident that...U.S. missile-defense interceptors would be sufficient to stop an attack...by North Korean ICBMs with multiple warheads each."

The two noted that building more interceptors might be too costly.

Is a test in the future likely?

North Korea's new ICBM, however, does have strategic issues. The missile is carried by a transporter launch vehicle that has at least 22 wheels. The launcher may be too large to travel on many North Korean roads, which are often in poor condition.

The large size of the missile also means it likely must travel with a team of fuel trucks and machinery to help lift it, Hanham said. She added that preparing the missile for launch would take hours. That would permit observers to identify the missiles setup. In addition to that, the missile remains untested.

But some experts say that could change. In January, the North Korean leader said that he no longer felt he had to continue his own ban on nuclear and long-distance missile tests.

U.S. President Donald Trump, however, has warned Kim against any provocations before the U.S. elections on November 3. Kim may be unwilling to risk such a test.

Bruce Klingner is a North Korea specialist at the Washington, D.C.-based Heritage Foundation.

Klinger told VOA, "What I would expect is to see that ICBM tested next year." He added: "North Korea tends to...do something very provocative in the first year of a new U.S. or South Korean administration."

Hanham said that North Korea may watch to see what happens in the U.S. elections. Although the North may choose to do nothing, they "have a powerful way of signaling their dissatisfaction now by testing this missile," she said.

intercept –v. to stop and take someone or something that is going from one place to another place before that person or thing reaches their goal

multiple –adj. many, more than one

decoy –n. something that attracts attention so that something else can go unnoticed

confuse –v. to make someone unable to understand what is going on

sanctions –n. actions taken countries against another country to force it to obey international law

confidence –n. a feeling of belief that something can done

provocations –n. actions that are taken to cause someone or some group to become upset or angry