< Experts Warn Jan. 6 Events Hurt World Democracy
Update Required To play the media you will need to either update your browser to a recent version or update your Flash plugin.
By Dan Friedell
06 January 2022


Thirty years ago, American political expert Francis Fukuyama wrote that the democracy in the United States was an example of the highest form of government.

But now, one year after the January 6 attack on the U.S. Capitol that left a number of people dead and many more injured, he says people and leaders around the world have a lower opinion of American democracy.

He told VOA that the events of January 6 showed the U.S. could not transfer power peacefully, and that failure "reverberated around the world." 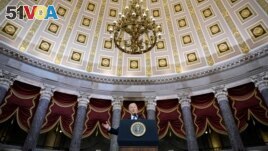 President Joe Biden delivers remarks on the one year anniversary of the January 6 attack on the U.S. Capitol, during a ceremony in Statuary Hall, Thursday, Jan. 6, 2022 at the Capitol in Washington. (Drew Angerer/Pool via AP)

Leading up to the one-year anniversary of the attack, VOA spoke with experts about January 6, 2021.

William Powell is an American Politics professor at the University of Chicago. He said former president Donald Trump's lies about the election results, and the unwillingness of Republican Party leaders to push against them, set an example for world leaders "who claim that democracy as an ideal is both fanciful and misguided."

People, he said, can no longer look to the U.S. for an example of democracy.

Max Bergmann is a researcher for the Center for American Progress. He said the example of Republican leaders accepting Trump's lies makes world allies uncertain about the future.

He said those countries will now ask: "If America moves in an autocratic direction, will it be there to stand up to other autocrats?"

Other analysts, however, say there is still time to fix America's image around the world.

The experts say current president Joe Biden must change how the U.S. is seen around the world.

One recent attempt was the Summit for Democracy in December. The White House organized a video event for over 100 countries to plan for "democratic renewal" and work together on the threats faced by democracies.

Biden also spoke inside the Capitol on Thursday to mark one year since the attack.

He did not use Donald Trump's name, but he said the former president "tried to prevent the peaceful transfer of power" and sat in a White House dining room "doing nothing for hours as the nation's Capitol [was] under [attack]."

Biden accused Trump of not being able to accept that he lost the election and spreading lies because "he values power over principle."

Biden spoke for about 20 minutes on Thursday morning. He said the United States must "decide what kind of nation we are going to be."

He asked if America is going to accept political violence or if it will "recognize truth and live by it."

The U.S. congress is investigating what happened last year. Over 700 people have been charged with crimes. On Wednesday, Attorney General Merrick Garland said the U.S. will prosecute those "at any level" responsible for the January 6 attack.

The experts say the problem the U.S. faces in the future is that nations such as China and Russia will always be able to use January 6 in arguments for why democracy does not always work.

Jake Sullivan is a National Security Adviser for Biden. He said U.S. adversaries are thinking: "How do we take advantage of this in one way or another?"

Leslie Vinjamuri directs the U.S. and the Americas program at Chatham House, a London-based international affairs research group. She said problems in the U.S. permit leaders who have "autocratic instincts to trample all over freedoms." She listed free elections and the right to protest as threatened democratic ideals.

Observers around the world say the U.S. can rebuild its image if what happened one year ago is a "one-off."

Jérome Viala-Gaudefroy teaches at a university in Paris. He said "all hell might break loose" if January 6 is only the beginning of a change in American leadership ideals.

But others think last year's attack on the Capitol signals a fast decline. Thomas Homer-Dixon leads the Cascade Institute at Canada's Royal Roads University. He recently wrote that by 2025, "American democracy could collapse," and by 2030 "the country could be governed by a right-wing dictatorship."

Patsy Widakuswara wrote this story for VOA. Dan Friedell adapted it for Learning English. Susan Shand was the editor.

Do you think problems with U.S. democracy will make it easy for dictators to rise around the world? Tell us in the Comments Section and visit 51VOA.COM.

reverberate – v. often used figuratively - to continue in a series of quickly repeated sounds that bounce off a surface (such as a wall)

ideal – n. an idea or standard of perfection or excellence

fanciful – adj. coming from the imagination

autocratic – adj. describing a government run by one person who has total power

summit – n. a meeting or series of meetings between the leaders of two or more governments

principle – n. a moral rule or belief that helps you know what is right and wrong and that influences your actions

trample – v. a moral rule or belief that helps you know what is right and wrong and that influences your actions

all hell break loose – expression. used to describe a moment where something falls apart with little warning