< Finding Participles in News Headlines
Update Required To play the media you will need to either update your browser to a recent version or update your Flash plugin.
By Alice Bryant
08 October 2020


I was reading The New York Times newspaper this morning and came across a headline that read "Laughter May Be Effective Medicine for These Trying Times."

A news headline is a very short summary of a news story that appears above the story, usually in large letters.

The Times headline got me thinking about how much the world could use some laughter right now. Because I love grammar, I also thought about ways headlines and sentences are the same and different.

To keep headlines short and catchy, English-based news groups use a few methods. Some, for example, leave out any form of the verb "be." Many also leave out the words "a," "an" and "the." And, most use the present verb tense. These are just a few examples.

All in all, there are more similarities than differences between headlines and complete sentences. That is why headlines can teach us about English grammar, including about participles. Some English learners find these word forms difficult.

On recent Everyday Grammar programs, we talked about present participles and past participles. On today's program, we will identify participles in news headlines and review them using a "test yourself" format.

Let me begin by reviewing present participles. They are very common in English-language news headlines.

As a reminder, the present participle is a word form that ends in -ing and has specific functions in English. For instance, it is used in all continuous tenses. The word "studying" in "You are studying English" is an example. In addition, some participles are adjectives, such as the word "shocking" in the sentence "His words were shocking."

Listen for the present participle word in the following headline, which I mentioned earlier from the New York Times newspaper. Decide whether the word is:

Laughter May Be Effective Medicine for These Trying Times

Did you find the present participle? It is the word "trying." Now, take a look at the phrase "trying times." The word "trying" describes the noun "times" so, in this headline, "trying" is an adjective. The answer is b. "Trying times" means a period of difficulty.

Now, look at the headline again. Have any words been left out that prevent it from being a complete sentence? You can tell us later in the comments and do the same for the other headlines.

Here is another one, this time from the VOA Learning English website. This headline has two present participles in it. We will focus on the first one. Listen to the headline and decide whether the word "becoming" is:

Did you decide on what "becoming" is? It is part of a continuous verb tense – in this case, the present continuous. So the answer is a.

Notably, the word "is" was left out before "becoming," so it may not have been immediately clear that you were looking at a continuous verb tense. Remember: Headlines often do not include the verb "be." 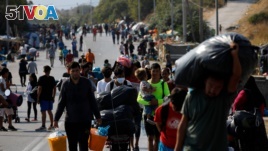 FILE - Migrants carry their belongings as they flee a road leading from Moria to the capital of Mytilene, on the northeastern island of Lesbos, Greece, Sept. 17, 2020.

Now let's review past participles, which are also common in news headlines.

To refresh your memory, the past participle is a word form that often ends in -ed and has three main functions in English. It is used in all perfect verb tenses, as in "I have visited that museum." It is also used in passive verbs, as in, "He is taken to school by his father." Additionally, some past participles are adjectives, like in the sentence "The animal is scared."

Past participles can have endings other than -ed since there are 200 irregular verbs in English. They may have any of several endings, such as -n, as in the words "seen" and "taken." Or they may look like a base verb, as in the words "run" "cut" and "cost."

Listen for the past participle in this headline from The Associated Press news service. Decide whether the word is:

Did you find the past participle? It is the word "restored." And it is part of the passive verb "are restored," so the answer is b. That one was not easy, since the headline left out the verb "be."

Remember that, in passive voice, the person or thing performing the action of the verb is often not mentioned. That is true for many headlines, as it helps to keep them short.

OK, now let's take a look at a headline from the CNN website. Listen carefully for the past participle word and decide whether it is:

Did you find the past participle? It is the word "awarded." Like the earlier example, this headline required you to think about what word might be missing – the verb "be" in this case. And "awarded" is part of the passive verb "is awarded." So the answer is c.

Well, I hope you enjoyed examining these headlines for participles. If you had trouble with them, do not worry! You can learn more about participles on our recent programs.

Alice Bryant wrote this story for Learning English. Caty Weaver was the editor.

Now, you try it! Examine the four headlines from today's story. Decide which words have been left out. Then, write the headlines as complete sentences in the comments. If there are no words missing, write "nothing missing." Here they are again:

Laughter May Be Effective Medicine for These Trying Times

summary – n. a brief statement that gives the most important information about something

tense – n. a form of a verb that is used to show when an action happened

review – v. to study or look at something again

function – n. the special purpose or activity for which a thing exists or is used

mention – v. to briefly talk about, write about, or refer to something or someone

focus – v. to direct your attention or effort at something specific

poll – n. an activity in which many people are asked a question or questions to find out what most people think about something

irregular – adj. not normal or usual

outage – n. a period when a power supply or other service is not available or when equipment is closed down