< Europe's Governments Set to Spend Billions as Energy Crisis Deepens
Update Required To play the media you will need to either update your browser to a recent version or update your Flash plugin.
By Gregory Stachel
01 October 2021


Europe is being hit with very unusual, recovery-related energy increases. This is causing worry that some families will not be able to remain warm this winter.

Politicians are also concerned about the effects on elections and the possibility that price increases will cause inflation to increase.

The International Energy Agency and United States officials have called on Russia to increase gas exports.

Amos Hochstein is a senior adviser for energy security at the U.S. Department of State.

"The reality is there are pipelines with enough capacity through Ukraine to supply Europe. Russia has consistently said it has enough gas supply to be able to do so, so if that is true, then they should, and they should do it quickly through Ukraine," he told Bloomberg TV. 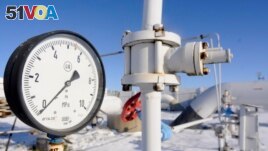 FILE - A gas pressure gauge reads zero on the main gas pipeline from Russia, in the village of Boyarka near the capital Kyiv, Ukraine, Jan. 1, 2009.

Some members of the European Parliament want the European Commission to examine Russia's majority state-owned energy company Gazprom. Lawmakers believe it is possible that Gazprom is using the market for its advantage and breaking EU competition rules.

In the not-too-distant future, Europe could see factories and businesses reduce production, which has caused warnings about food shortages.

British ministers have called emergency talks with industry representatives on the problem of increasing gas and electricity prices. Seven natural gas suppliers have gone bankrupt in the past six weeks from a gas price increase of 70 percent in August. Three others may face bankruptcy as well. That is because suppliers cannot pass the full price increase on to customers due to government restrictions on energy prices.

Other officials are not ready to use taxpayers' money. Britain's business official, Kwasi Kwarteng, told a group in parliament that the energy industry must first "look to itself" for answers.

In Spain and Portugal, average energy prices are three times what they were 6 months ago. Spain's government plans to cut taxes on energy bills.

Norway offered some relief by saying that its state-owned energy company will increase production of natural gas in the North Sea.

In Italy, ministers have warned of electricity prices jumping by 40 percent in the last three months of 2021. They are creating emergency plans to deal with the increases. Some Italian officials say $5.27 billion is being considered to aid families. Italy imports two-thirds of its energy needs.

Jamie Dettmer reported this story for Voice of America. Gregory Stachel adapted it for VOA Learning English. Susan Shand was the editor.

extortion – n. the crime of getting money from someone by the use of force or threats

reality – n. the true situation that exists: the real situation

capacity – n. the amount of something that can be produced or managed by a factory or company

consistent – adj. always acting or behaving in the same way