< EU Warned against Naming Industrial Farming Good for Environment
Update Required To play the media you will need to either update your browser to a recent version or update your Flash plugin.
By Dan Novak
30 November 2021


A group of global investors is urging the European Commission not to consider industrial farming an activity that is good for the environment.

Reuters reported the request last week. It said the international group of companies that wrote the letter to the commission is together worth more than $3.5 trillion. 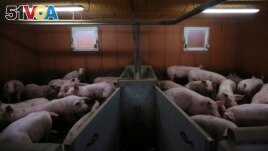 The European Commission is close to defining what activities the European Union considers sustainable. The EU hopes the move will get businesses to help it lower emissions of carbon gasses linked to climate change, also called greenhouse gasses.

It has been difficult, however, to reach political agreement on what activities to include in the EU taxonomy. Taxonomy is a word describing to a process of placing things in groups based on their qualities.

Farming is responsible for around 10 percent of the EU's carbon gas emissions. But how to deal with farming in EU rules has been a disputed issue because the industry is so important and employs many people. Countries and trade groups also have an interest in continued government support for the nuclear energy, gas and farming industries.

The investor group wrote to Commission President Ursula von der Leyen on October 5. The group said it was making its position public after a report sent to EU governments proposed that a large amount of agricultural subsidies should be considered sustainable or "green."

"It is critical that the EU Taxonomy only defines as green those sectors that are genuinely environmentally sustainable," said Helena Wright. She is with the FAIRR Initiative, the investor group that led the effort to write the letter to the Commission.

"It is deeply concerning to see a proposal that would count EU agricultural subsidies as green, when we know that many of these subsidies are harmful," she said.

The letter was released one day after the European Parliament approved reforms to farming subsidies under the Common Agricultural Policy, known as CAP. The reforms give more money to smaller farmers that use sustainable methods.

Under the new rules, at least 10 percent of CAP money will go to smaller farms. All farm payments would be tied to following environmental rules.

Alexander Burr is head of environmental policy issues at Legal & General Investment Management. He said the EU's decisions need to be based in science.

Burr said they must support reducing emissions and that "agriculture is a key but often overlooked sector."

sustainable — adj. involving methods that do not completely use up or destroy natural resources

emission — n. (often pl.) something that is sent out, given off or released

taxonomy — n. (technical) the process or system of describing the way in which different living things are related by putting them in groups

subsidy –n. money that is paid usually by a government to keep the price of a product or service low or to help a business or organization to continue

biodiversity –n. the existence of many different kinds of plants and animals in an environment