< Ethiopian Forces Battle Tigrayans as Refugees Head to Sudan
Update Required To play the media you will need to either update your browser to a recent version or update your Flash plugin.
By Susan Shand
10 November 2020


Ethiopian government troops were reported to have captured an airport in northern Ethiopia from Tigrayan forces on Tuesday.

State media said federal forces had captured the airport, near the border with Sudan and Eritrea, as well as a road leading from the town of Humera. Reuters news agency says information from the area was difficult to confirm because all communications are cut.

The Tigray People's Liberation Front (TPLF) governs Ethiopia's Tigray Region, which is home to 5 million people. The TPLF did not comment on the reports.

Last week, Ethiopian Prime Minister Abiy Ahmed ordered airstrikes and sent troops into Tigray. He had earlier accused the TPLF of attacking a federal military base.

Tigrayans say Abiy's government oppresses and discriminates against them.

The African Union (AU) has called for peace talks and an end to the fighting.

The Ethiopian government said talks were only possible if Tigrayan leaders were arrested and all weapons held by the Tirgayans destroyed. It also has called for the release of federal officials detained in the area. 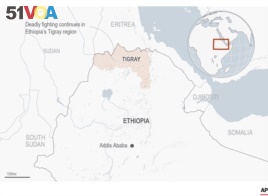 Map of the Tigray area

About 2,500 Ethiopians have fled the fighting into neighboring Sudan. The number of refugees is expected to increase, a Sudanese official noted.

"The number is increasing," said Alsir Khaled. He is a refugee commission official in the Sudanese state of Kassala. "These people need shelter and medical treatment and food and there is a great shortage."

The 44-year-old Abiy is Africa's youngest leader. He won the Nobel Peace Prize in 2019 for democratic reforms and for making peace with Eritrea, Ethiopia's longtime enemy.

But the military operation against Tigray has worried diplomats. Some fear the country could fall into civil war given the deep hatred between the Tigrayans and the prime minister.

A war could further damage the economy, which has already been badly hurt by the coronavirus crisis.

Abiy is a former soldier who once fought alongside Tigrayans against Eritrea. He became prime minister in 2018.

Abiy has opened the country's formerly oppressive government and political system. But that has led to a large increase in ethnic problems. Hundreds of Ethiopians have fled their homes for fear of ethnic violence over the past two years.

In a possible escalation, Tigray leader Debretsion Gebremichael said the Eritrean government sent troops across the border. The Eritrean forces were said to have attacked Tigrayan soldiers in support of Ethiopian federal troops.

But he gave no proof and Eritrea's Foreign Minister Osman Saleh Mohammed denied it. "We are not part of the conflict," he told Reuters.

Eritrea and Ethiopia signed a peace deal two years ago. The Eritrean government remains hostile to the Tigrayan leadership for its part in a bloody 1998-2000 war.

Reuters reported that aid workers and security sources have spoken about airstrikes on arms storage centers and other targets as well as heavy ground fighting.

TPLF forces number up to 250,000 men and is heavily armed, experts say. The TPLF has called the prime minister "merciless" because of the airstrikes.

source - n. one who reveals information

merciless - adj. without kindness or forgiveness